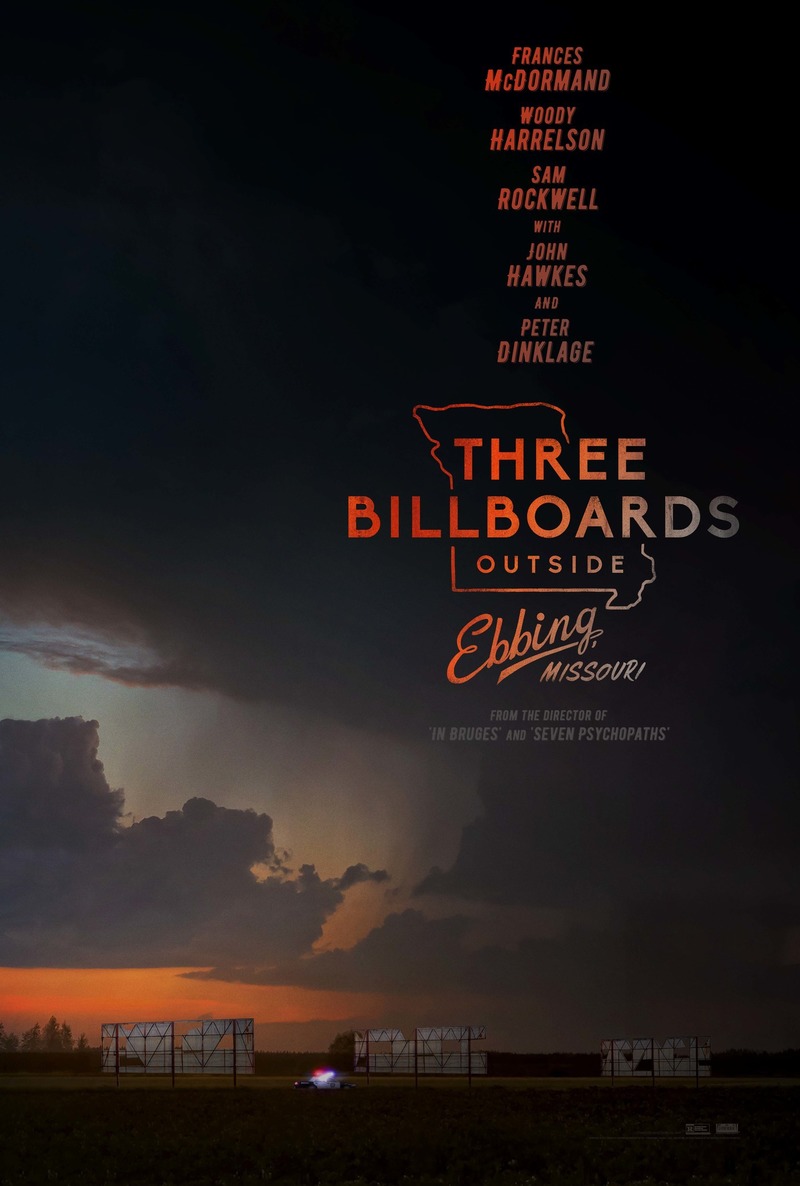 MOVIE THEATER REVIEW: “Three Billboards Outside Ebbing, Missouri” stars Frances McDormand (Blood Simple, Fargo [1996]), Woody Harrelson (Zombieland, Now You See Me), Sam Rockwell (The Way Way Back, Seven Psychopaths), Caleb Landry Jones (Get Out, American Made), Abbie Cornish (Candy, Sucker Punch), Lucas Hedges (Manchester by the Sea, Lady Bird), Zeljko Ivanek (Argo, In Bruges), Peter Dinklage (Game of Thrones [TV series], X-Men: Days of Future Past), Amanda Warren (Black Mirror [TV series], The Leftovers [TV series]), Sandy Martin (Napoleon Dynamite [2004], Big Love [TV series]), and John Hawkes (Winter’s Bone, The Sessions). It is written and directed by Martin McDonagh (In Bruges, Seven Psychopaths). Seven months after the death of her daughter, Mildred (McDormand) purchases three billboards to call out the local police department for not finding the perpetrator of the crime. Controversy and chaos strikes the small town of Ebbing due to this, forcing Mildred into a heated debate that no one wanted to be involved in.

Good grief, this isn’t easy. To be quite honest, I don’t know how to analyze “Three Billboards Outside Ebbing, Missouri” in an efficient way. It’s one of those films that you walked into thinking it would play out one way, but instead strut its stuff  in another direction. It’s dialogue is zany, the story flow is off-the-charts, and the performances are downright brilliant, leaving me in a puddle of obscurity in leaving the theater. I came to this movie for a variety of reasons: it’s produced by Fox Searchlight, it has the look of a Coen Brothers feature, and it stars Sam Rockwell; there’s not much going against it. Little did I know that Martin McDonaugh would flesh this tale about a grieving, cynical mother getting back at the local police department into something completely neurotic, violent, and downright unforgiving. The dialogue in this is something I’ve hardly ever seen in a picture. Everyone barks at another in terrible retorts; verbal and physical abuse dance across the screen, with an underlying sense of love hidden in the cracks. Granted, the moments of love are too little and far in between, but for the most part I was captivated. It’s difficult for any viewer to take notice in a style of writing, and this one has a clear sense of what it is. Do I like it? I have no clue; this is where obscurity comes in. While I find “Three Billboards” to be an engaging, entertaining, and captivating experience from start to finish, I couldn’t help but feel bereft walking out of the theater. There’s a lot of zaniness and dark comedy involved in this picture, with hardly any moments of clarity or redemption. A few agendas are pushed, while the overall arc of how screwed the world is oozes from the plot. You just gotta love those cynical features, right? I mean, it’s typical of Fox Searchlight to green-light movies such as this, but I admire the companies willingness to boldly go where no big industry (cough, Disney, cough) will travel. “Three Billboards” is fresh, with an interesting set of characters that are either bitter or complete morons. The acting is superb, with killer performances handed in by Francis McDormand, Woody Harrelson, and the best of them all…Sam Rockwell. His character was astounding, and Rockwell pulled a terrific feat (please Oscars, pick him as Best Supporting Actor). Their bickering, snarkiness, and overall bitterness to each other and the world made for interesting scenes. I never expected it to be as hilarious as it was in that regard. With all of this in mind, I must dive into why exactly I was bereft walking out. I mentioned how obscure it was in analyzing the writing, and I have come to the conclusion that the reason why I am not fully satisfied with this film is because the story isn’t moralistic at all. Only one character was redeemed, while the rest of the plot crumbled under the theme that we are all messed up and there is nothing we can do about it. It’s sadistic, and I felt uneasy as to how there couldn’t be a single glimmer of good morals or joy found in anyone. Sure, I get it: life isn’t a ray of sunshine. However, this isn’t the real life case. This is the trend all movies follow that wanna be edgy and award-worthy, and it’s become the norm. It’s a shame that “Three Billboards” only gave redemption in one character, and never even tried to show the bright side of life that is real. While there is much to appreciate about this movie, there is certainly a lot to be obtained from it if it took a better approach to its agendas. FINAL SCORE: 85%= Juicy Popcorn
Here is the trailer:

One response to ““Three Billboards Outside Ebbing, Missouri””