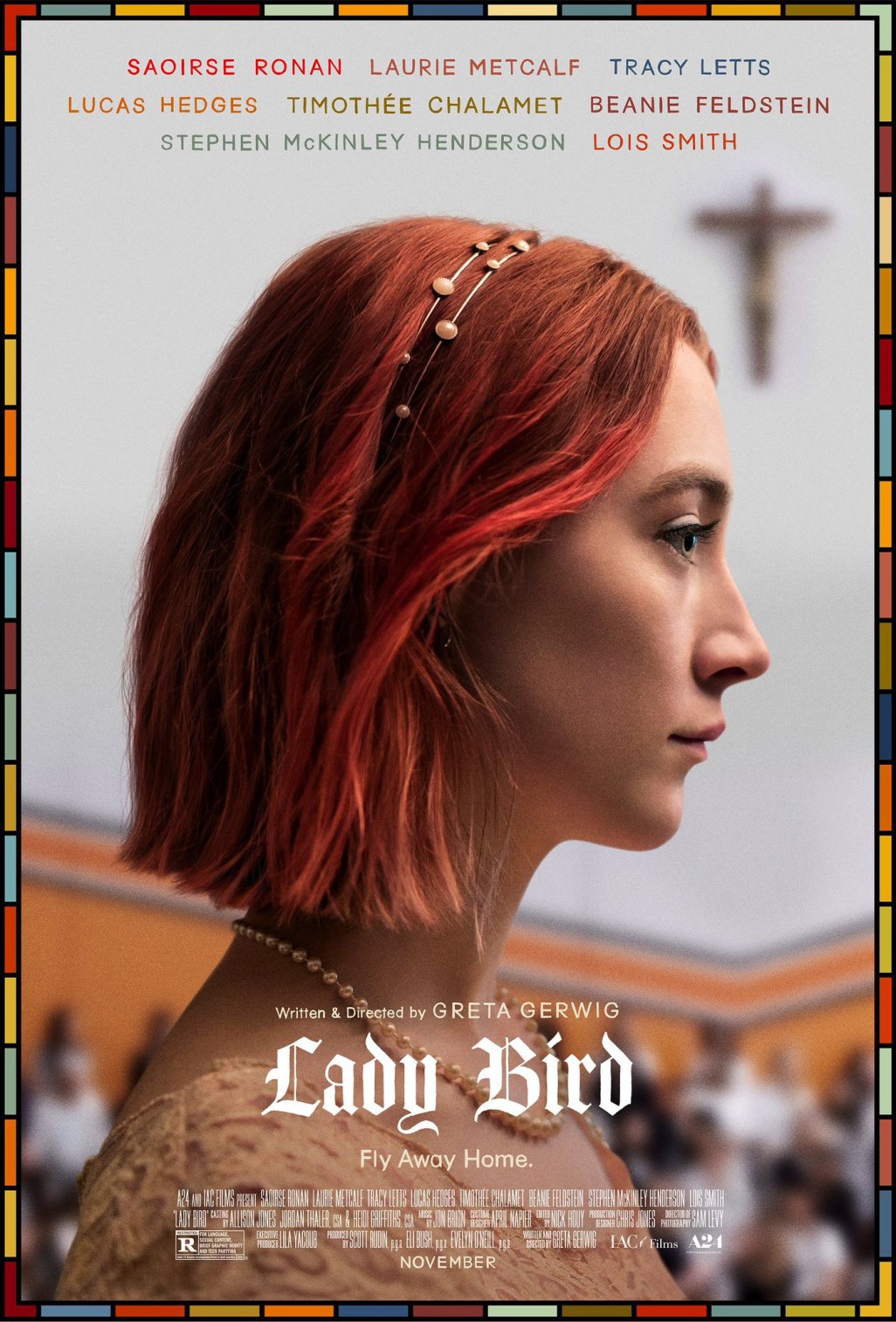 MOVIE REVIEW: “Lady Bird” stars Saoirse Ronan (Hannah, Brooklyn), Laurie Metcalf (Toy Story 3, Scream 2), Tracy Letts (The Big Short, August: Osage County), Lucas Hedges (Moonrise Kingdom, Kill the Messenger), Timothée Chalamet (Interstellar, Call Me By Your Name), Beanie Feldstein (Neighbors 2: Sorirty Rising, The Female Brain), Lois Smith (Minority Report [2002], Twister), Odeya Rush (Goosebumps [2015], The Giver), Jordan Rodrigues (Home and Away [TV series], The Fosters [TV series]), and Marielle Scott (30 Miles From Nowhere, Is This Real? [Short]). It was written and directed by Greta Gerwig (Nights and Weekends, Frances Ha). Set in 2002, a high school senior named Lady Bird (Ronan) goes through the daily troubles of life, including her Catholic school and rift between her and her mother, while trying to figure out who she is and what she is meant to do in the future.

Broken relationships, oddball interactions, and a Catholic school. This is “Lady Bird,” another Best Picture nominee from this year’s Oscars. It’s not that difficult to see why this was nominated in the first place; it has great performances, interesting dialogue, and a story that is engaging even though there is no set structure. “Lady Bird” is simply the day-in-the-life of a high schooler hoping to pursue her dreams, whatever they may be. There’s conflict, whether it is her mom, various boyfriends, or her school system, but overall it is how she changes in character from beginning to end that we take interest in. Lady Bird is an odd character; heck, a lot of the students in the fictional school are. But with the titular character we see the awkwardness that we all encountered in school. Instead of it being overly characterized, however, it is subdued to an almost realistic sense. Lady Bird’s personality and decision-making made for a peculiar experience, as she jumped from one interest to the next while being in constant banter with anyone opposed to what she fought for. The performances were strong, with a great array of actors putting in their best efforts. Saoirse Ronan was amazing, as was Laurie Metcalf. Their chemistry was electric and the centerpiece of this entire picture. Both of the characters are flawed and exemplified in how they cannot communicate with each other because of emotional barriers. All the moments shared between them were the best of this film, and even gave way to great bookends in the story. Speaking of which, I enjoyed it for the most part. The first act of this tale was the best, offering a nice, clean glimpse into who these characters are and introducing to the audience the challenges they face. Obviously, there isn’t a grand scheme to this movie; it starts and ends, with the only changes being with the characters and giving them closure. Lady Bird’s senior year of high school was an interesting one. So much so that I was actually able to stay up from midnight to two in the morning watching it. It certainly was an entertaining ride, though I will say that it has its flaws (like most movies do). What I found to be a problem with “Lady Bird” was how a change of gears in the second act brought distaste to my viewing experience. It’s wordy phrasing, I know, but I’m simply saying that the first forty minutes were better than the rest of the picture. Within the back-end of the second act and into the third we see Lady Bird do all kinds of crazy things, abandoning friends, having sex, and flat-out going all over the place in terms of her character. She never lost her sense of development, but as a viewer what I was seeing unfold didn’t have great appeal to me. Thankfully, the character was able to own up to her mistakes and turn the tides, which led to a better rating than what I would’ve given it. This is not to say that I mark down any film with people having pre-marital sex or doing things that aren’t moralistic. It’s when redemption isn’t factored in or a grand theme that I get upset; on top of that, I just didn’t care for what Lady Bird was doing in the second act leading into the final as much as I did in the beginning. There were some bright spots for sure, but overall I took more enjoyment from the beginning than the middle. In the end, I thought “Lady Bird” was a nice picture. It holds great qualities even though it dwells in teenage tropes and drama during the second act that make it less appealing. I would tell people to give it a shot. FINAL SCORE: 84%= Juicy Popcorn

One response to ““Lady Bird””