MOVIE REVIEW: For the first movie review of July 2015, I watched “Gamer” which stars Gerard Butler (300, Olympus Has Fallen), Michael C. Hall (Dexter [TV series], Six Feet Under [TV series]), Amber Valletta (Hitch, Transporter 2), Kyra Sedgwick (Phenomenon, The Closer [TV series]), Logan Lerman (Fury, The Perks of Being a Wallflower), Ludacris (The Hangover, Fast & Furious 6), Alison Lohman (Big Fish, Matchstick Men), and Terry Crews (Blended, Norbit). It is directed by Mark Neveldine and Brian Taylor (both directed Ghost Rider: Spirit of Vengeance and Crank). This movie is set in a futuristic world where humans can be controlled by other humans in a multiplayer gaming platform using real life environments because of the invention of nano-cells which is technology used to control someone’s mind. The creator of this invention, Ken Castle (Hall), has developed a social game called “Society” with this device which is like a Sims game, but dirtier. After the huge success of the game, he soon created a new game called “Slayers” in which the players can control a real person in a battlefield where they fight several missions that can be life or death for the person being controlled. All of the people controlled in this game are real prisoners who are offered freedom if they last all of the battles. One of them is none other than Kable (Butler), a man convicted of murder who has risen to stardom because of how long he has survived. But it won’t be an easy road ahead since Castle wants him dead because of secret information Kable knows. 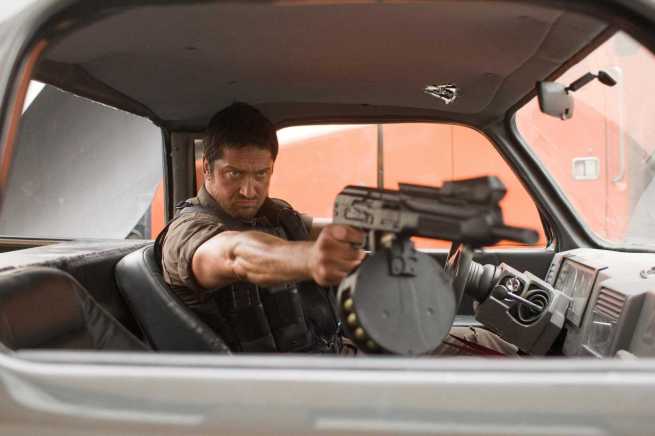 I don’t know what the heck I just saw. I mean, I do, but I don’t understand why someone would make something like it. I asked for this movie for my birthday because I thought the plot was promising and although that is so, it was executed in the weirdest of ways. Like Terry Crews sung in this movie (yes he sang), this review will have no strings to hold it down, so I will come out and say that this movie is one of the creepiest movies I have ever seen, and it wasn’t that good. Before I delve into what makes this movie the way it is, I will state the positives. The first and foremost that comes to mind is Gerard Butler. The acting in this movie is good for what script they are given, but Butler exceeds. This man is just awesome to watch in any action role. He was epic in “300” (which I recently gave a better score, check it out) and he was cool in this. But with the weak script he was given, there wasn’t much he could do. The next pro would be the color scheme. There is about four different color schemes used in this movie to set a tone for different scenes, like switching between two different games. It was weird, but I couldn’t help but like it because it is something different. Finally, the last pro of this movie would be how I didn’t lose interest. No matter how controversial and bad it was, I didn’t feel bored. I will admit, there were scenes that were actually cool, mainly some of the battle scenes in “Slayers” with Gerard Butler kicking butt. The problem is, since this movie is so messed up I ask myself “should I even like anything in this film because of how bad it is?” and the scene could end up losing its value. With the pros out-of-the-way, let’s get down to what really made this film a disappointment. One that comes to mind is how dirty it is. There is random cussing in this film for no reason and nude shots that will make me want to take a shower after seeing. This film subjects you to the realism behind some gamers, especially in “Society” where the most dirty stuff happens, and how much of perverts they can be. It is just sick and makes me not want to watch it more than once. With the directors’ (who also wrote this) resume, I would actually expect this seeing as how weird “Ghost Rider: Spirit of Vengeance” was. But that never means that I wanted it this way. The next issue I have is how most things make no sense in this film whatsoever. The first that comes to mind is the dance number at the end. There is a scene where Ken Castle dances with a bunch of people under mind control while singing Frank Sinatra’s “Under My Skin”. It had no point, but to see Gerard Butler beat up people, which even that made no sense. Another thing that was senseless, which is out of the norm of the film itself, was how many famous people actually signed up for this. Some of their names I didn’t know, but I could recognize them from somewhere and that’s enough. Heck, I even saw James Roday and Maggie Lawson in this film who played Shawn Spencer and Juliet O’Hara on the TV series “Psych”. I don’t know if they were blackmailed or if they owed a favor, but I would’ve never acted in this. Besides the fact that most things made no sense, another con would be the flow of the action scenes in the game “Slayers”. Yes, I liked some of the scenes, but at a larger glance, this film has the most fast-paced cuts I have ever seen. They try to make it as hectic as possible with several glitches, different angles, and fast cuts in these war scenes, making it hard to tell what is going on at times. I thought it was a poor style to film something. The final con I have for this movie is other than Butler’s Kable, I didn’t feel any sympathy for any of the other characters. All of them felt fake, especially Kable’s wife, Angie (Valletta). She did things that made no sense to her character and in turn made me not like her when I think the script was made for me to feel sympathy for her. When you have a film that can’t connect you to the characters, you know it isn’t good. And with that in mind, I have to give this a bad rating. It can be entertaining at times and held my interest, but overall it is a poor excuse for a film, throwing away a good idea. FINAL SCORE: 49%= Burnt Popcorn

One response to ““Gamer””