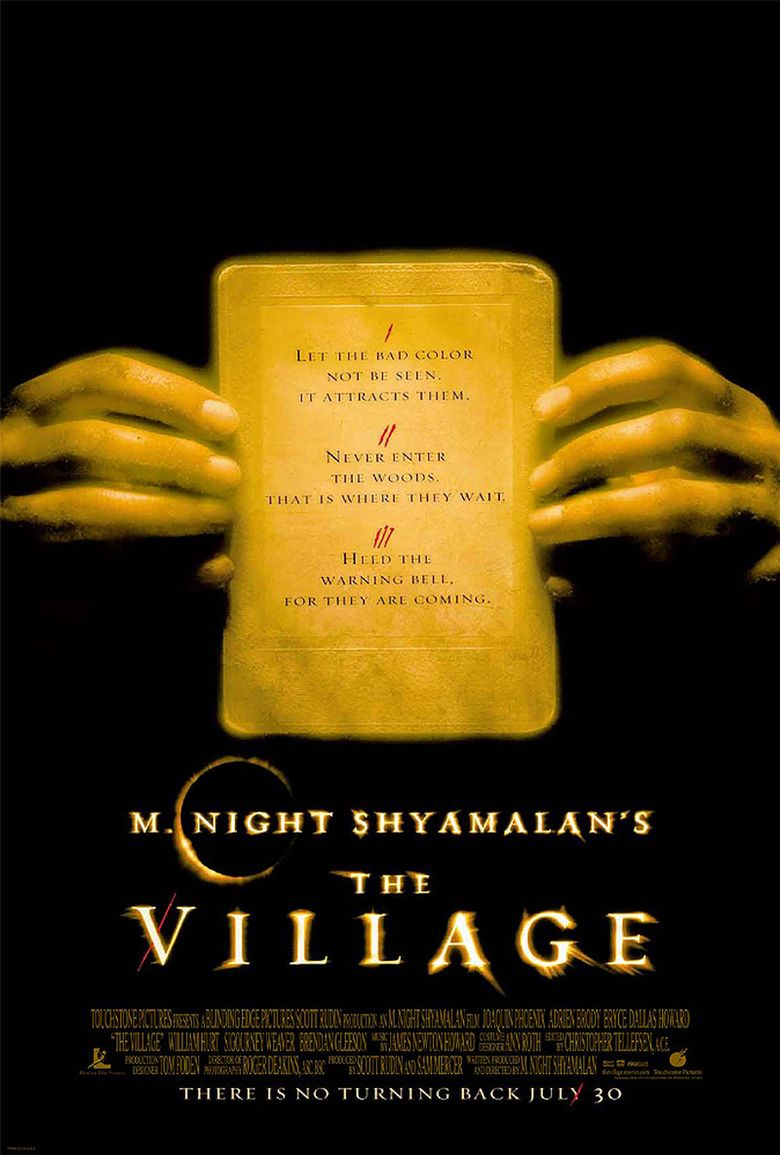 A series of saddening events take place in a small, isolated countryside village, prompting one of the townsfolk to leave and chance her life for the well being of her loved one.

It seemed fitting to end this month with an M. Night Shyamalan film. The man delivers on unsettling stories (at least, in his earlier days), while managing to develop impactful moments and genuine characters. At this point in his career, M. Night was entering a critical slope regarding his features, with his fifth picture “Signs” not performing as well as “The Sixth Sense” and “Unbreakable” with the critics. “The Village,” his sixth entry, is no exception; but to this reviewer, I quite enjoyed it.

Having only seen the poster of this movie, I was led to believe that “The Village” was a dark horror. What with that black backdrop and hands holding a cryptic piece of parchment, it wouldn’t surprise me if someone expected something sinister. Instead, I received a love story shrouded in mystery and grief. A concoction I haven’t seen from M. Night, though applaud him for.

From the outset, it’s clear that Shyamalan wanted a character study with this piece. A small village of people endure great trials as the movie begins with a funeral and unfolds in further dispair. Death is something these villagers don’t encounter often. Everyone goes about their merry way enjoying the family and friends they hold dear, with the only thing to fear being the monsters that lurk in the woods around them. Yep, there’s monsters. Well… creatures, I guess. They’re odd beings that kill anyone who enters the forest. So, no one really leaves the village. But do they have to when everything they could ever want is there? This is ultimately tested when one of their own is on the brink of death, with the only cure being in a town outside of the village… past the forest.

This creature element provided me great intrigue. Their design is cool and the way about them is so mysterious. However, it goes without saying that they are merely a small peg in this great puzzle of a film… or rather, non-puzzle of a film. Like I stated, “The Village” is a character study. The leading character torch gets passed around a few times in this, landing primarily on Bryce Dallas Howard’s character of Ivy Walker. She is a blind woman whose love story with Lucius Hunt (Phoenix) makes for compelling cinema. The moments they share and the way M. Night captures them are quite beautiful and eloquent; it’s the best part of the picture and the driving force behind such a subtle, thematic drama.

M. Night’s direction is still on point, aligned with his greater films before it. He doesn’t miss a beat, with stylistic choices that draw me in and hold me tight. There’s no big action piece, nor horrific sequence of events. The saddening moments sneak up on you, and the climactic bits pack a punch. He surrounds this story with an all-star cast, boasting the likes of many of my favorite performers. Phoenix plays a sweet, kind fellow (something I’m not used to) with precision, and Dallas Howard steals the show in possibly her best role I’ve seen. I also enjoyed William Hurt, Adrien Brody, and Brendan Gleeson in this; they are fantastic, and to share a screen together is quite magical. Everyone brought their a-game to this, making for a solid viewing experience.

“The Village” isn’t M. Night Shyamalan’s best film. I predicted his big twist (though was surprised at a smaller one that appears toward the end of the second act), and think that there’s a lot trying to be accomplished in the narrative that causes a less focused story. He paints a wonderful romantic tale that at the same time tries to be a mystery with twists and turns. This can be done well, mind you, and while M. Night does a fairly good job at it, the big twist moments didn’t land as much as I would’ve wanted. And all the while, the differing aspects of this story felt more like pieces than a collective whole.

Regardless, if you are a fan of this writer/director, you will enjoy this. It’s a beautiful picture with memorable moments. Not to mention unique, which is difficult to come by these days. FINAL SCORE: 85%= Juicy Popcorn

Here is the (rather misleading) trailer: