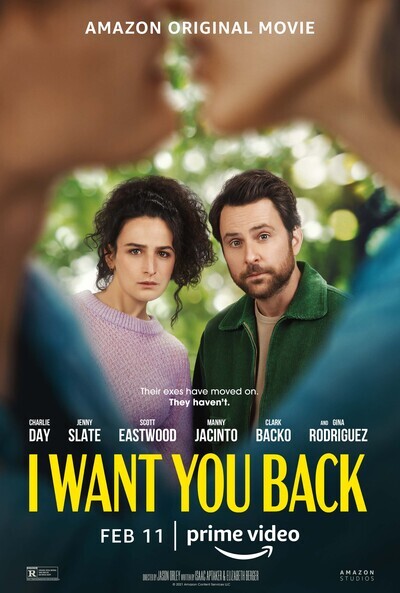 Peter (Day) and Emma (Slate) have recently been dumped. When they run into each other in the stairwell of their office building, they hatch a plan to get their lovers back, by breaking apart their exes’ new relationships.

Wait a second… you mean to tell me that there are actually good romantic comedies being made today? Consider my mind blown.

Amazon Prime Video throws down the chips on a star-studded rom-com with “I Want You Back,” a story about two newly single people teaming up to get their exes back. It’s a classic, smart angle in a genre that can get tired real fast. What makes things better is the wonderful cast, fit with heavy hitters in the comedy world that make this movie-watching experience a delight.

Yes people, I have a soft spot for romantic comedies. One of them won the Best Movie of the Year for 2021 on this site. It used to be a hated genre of mine, but over time my hopeless romantic nature got to the best of me. When I heard Charlie Day from “It’s Always Sunny” was in a new movie and it was a rom-com, I had to jump at it the soonest I could. Low and behold, it’s quite good, and for many reasons; chief of which being the ensemble of characters. Charlie Day and Jenny Slate shine in this story, with a chemistry that works. The two come from the world of comedy, and the witty script gives them plenty to mess around with. There are many moments that I laughed at, but the real humor lied in the small banter and character quirks given by both Day and Slate. Though they wouldn’t be Hollywood’s choice to shoulder a big romantic feature, they certainly give the genre a run for its money.

Seeing these two characters try to split up their exes’ relationships makes for fun entertainment. There aren’t many dull moments to be had, as the jokes keep rolling and the more heartfelt sequences hit when they should. Obviously, there’s a formula to follow, and it’s fairly easy to predict, but would you really want it to end any other way? At the very least, the writing team on this penned a clever finale. The highs and lows to get there were felt, and it was nice to see a softer, less tense story at the end of a busy work day. The cinematography is warm, the songs a perfect blend of modern and classic sounds (loved the Durante ditty at the beginning), and the setting/locations pleasing to the eye (especially that riverboat ending and Peter’s retirement home workplace). It’s a neatly made picture that checks the necessary boxes, while bestowing the audience good humor and performances.

One thing that should also be mentioned are the awesome supporting characters. I haven’t seen these people in much of anything (Eastwood, Rodriguez, Jacinto, and Banko), and it was rather interesting to see them play the parts of the outside relationships. All of them gave me a laugh, and had distinct enough personalities to stand out. There was, however, an issue I had with one of them. That being Rodriguez’s Anne. While I could sense the lesson Peter had to learn from her (and it made sense at the start), the decision made about her character by the end didn’t seem all that fair. People change, but I guess she wasn’t meant to be given that chance. On a separate note, there were a few guest appearances in this from familiar faces that had me dying. I won’t say who (and I didn’t list them in the credits at the top), but for those of you who know these people, you will be well-pleased. There was an added benefit to having these people, simply because I would’ve never figured them all to be in the same movie.

“I Want You Back” is a rare case of a good, modern rom-com. The leads of Day and Slate are wonderful, and gift us with plenty funny scenes that will leave you laughing. It’s a nifty idea with smart writing to keep you engaged, and while it can follow formula, it makes the journey fun. Which is all I can ask with this genre. If you have Amazon Prime, check it out. FINAL SCORE: 87%= Juicy Popcorn

One response to ““I Want You Back””