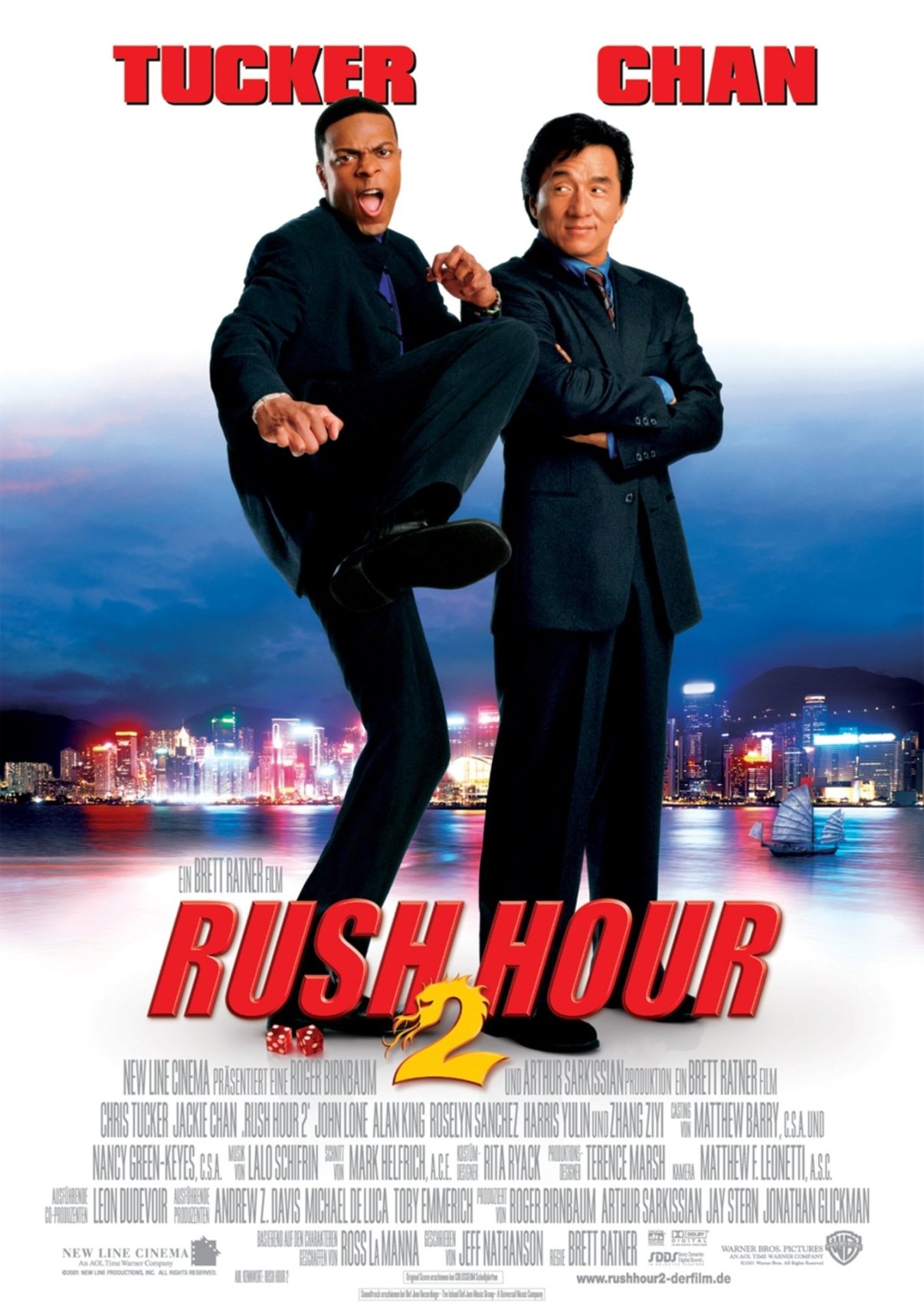 RUSH HOUR MOVIE REVIEW: “Rush Hour 2” stars Chris Tucker (Friday, The Fifth Element), Jackie Chan (Supercop, Kung Fu Panda), John Lone (The Last Emperor, Year of the Dragon), Ziyi Zhang (The Grandmaster, House of Flying Daggers), Roselyn Sanchez (Act of Valor, Without a Trace [TV series]), Alan King (Casino, Memories of Me), Harris Yulin (Ghostbusters II, Scarface), Kenneth Tsang (Die Another Day, The Killer), and Don Cheadle (Iron Man 2, Crash). It is directed by Brett Ratner (X-Men: The Last Stand, Tower Heist) and written by Jeff Nathanson (Catch Me If You Can, Pirates of the Caribbean: Dead Men Tell No Tales). Carter (Tucker) and Lee (Chan) are back, and in China. While on a vacation, Carter is pulled into Lee’s investigative case when a bomb goes off at the American Embassy.

What a sequel. You know, it wasn’t like I was skeptical of “Rush Hour 2.” I was more so just… curious as to what reaction I would receive from it. Growing up, I mainly remember the third entry being talked about. Probably because it was released during a year I can recall to (2006, where I was but a wee eight year old). Now that I’ve seen the original, it begs the question as to where Carter and Lee can go. What is up from here? Well, China, that’s what! Yep, this sequel pretty much takes place right where the first left off, with Carter visiting China for vacation, only to be pulled back into investigative work when Lee’s our on a case. Forget all the secondary characters introduced in the first outing (no more president’s daughter or love interest for Carter), this one is wiping the slate clean and injecting more humor and action than the first one could fathom. Seriously folks, this one is a joke fest. Where the first “Rush Hour” sought to tell a tale of two cities coming together for the same cause, this one prides comedy over story, pushing the plot as far back as possible. Sometimes for better, others for worse. All in all, “Rush Hour 2” is a very funny, entertaining follow-up, with enough exciting moments to keep any audience engaged. It’s more up beat than the first, delivering punch after punch in both fight sequences and quippy banter. In all honesty, I could see this being the one you’d show your friends if they wanted something fun and mindless to see (if they didn’t mind seeing it without the set-up of Carter and Lee from the first film). With all of this said, “Rush Hour 2” unfortunately doesn’t reach the quality of its predecessor, based solely on its thin storyline. Whether or not you hold this product to a high standard will determine the score you give it. My brother who watched it with me thought it was better than the first, claiming that these are films built for comedy and action, which the second unfolds in spades. However, to me, there was not enough meat with the storyline itself to give this the extra push. Particularly because the writers make some… questionable choices regarding the characters. Ones that make me wonder if they were told to forego the nature of the two leads and lean them into a more silly being. Lee hits on a woman while stalking her through binoculars (“slow down baby”), Carter consistently claims he can’t understand a thing Lee says, and overall, well, Carter is a complete moron. In the first film, he was arrogant. It played into the comedy well in that, while he was good at what he did, he had unorthodox methods that left him stranded. In this movie, he just does whatever he wants, with almost no care for the law. He even tells Lee to shoot an unarmed man in the face by the end. What in the world? I can’t explain enough just how stupid it was. Granted, I was laughing, but half of those laughs went to the perplexity this characterization presented. It’s as if these leads became caricatures of themselves, which makes sense if the movie’s sole focus was to up the laughs and fights. They rolled with the punches and glazed across plot points with such speed that some moments felt forced. Specifically the whole bit of Lee thinking Carter was dead after a bomb goes off in his office. While the two had an argument before the bomb went off, it wasn’t enough to warrant a separation like this, where the two characters split up after one thinks the other died. It was even resolved a few scenes later. Why have it? I don’t know. So both characters could pursue their own lead, I guess. “Rush Hour 2” performs well in certain areas and lacks in others. While I rolled my eyes at the flimsy storyline and silliness of characters, I can’t hide the fact that I did enjoy myself. The comedy is good and the action scenes are awesome, with terrific stunt work once again. As far as sequels go, this one isn’t too shabby, and I would even go as far to say that you’ll have a good time seeing it, regardless of its weaknesses. For what it is, “Rush Hour 2” does well. FINAL SCORE: 77%= Juicy Popcorn