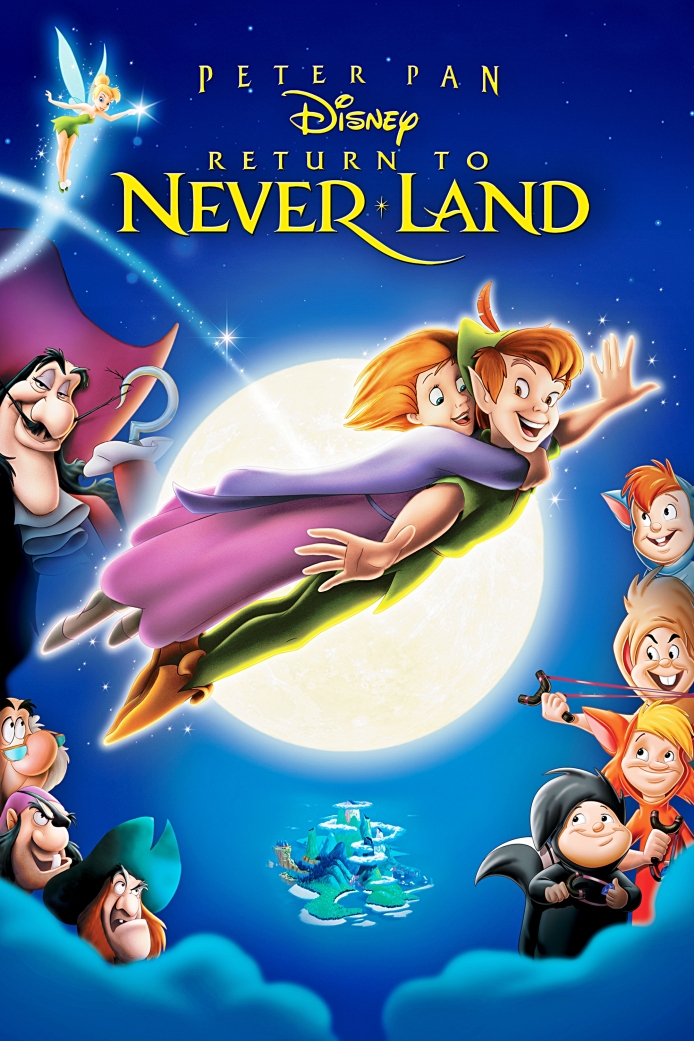 NOSTALGIA LANE MOVIE REVIEW: “Return to Neverland” is voiced by Harriet Owen (Castles [TV series], Relative Strangers [TV miniseries]), Blayne Weaver (Manic, 6 Month Rule), Corey Burton (The Hunchback of Notre Dame, Treasure Planet), Jeff Bennett (Johnny Bravo [TV series], Dexter’s Laboratory [TV series]), Kath Soucie (Rugrats [TV series], Beauty and the Beast [1991]), and Spencer Breslin (The Happening, The Kid). It is directed by Robin Budd (Beetlejuice [TV series], Ruby Bloom [TV series]) and Donovan Cook (2 Stupid Dogs [TV series], Mickey, Donald, Goofy: The Three Musketeers). The setting is World War II in London, where we find a grown up Wendy (Soucie) and her two children waving goodbye to her husband. He asked of their daughter, Jane (Owen), to take care of her mother and brother and she takes this word very seriously, leaving behind her childish instincts to act more adult-like. It all comes at a price, however, when she throws out being a kid because she doesn’t connect with her brother as well as she used to and knocks down all of the stories her mother tells him of Peter Pan (Weaver) because she doesn’t believe. That’ll all change in time though because before she knows it, Captain Hook (Burton), mistaking her for Wendy, steals her from her home at night to take her to Neverland, using her as a bargaining chip so Peter Pan can give him back the treasure he stole.

Disney sequels….they aren’t the most popular among fans. There is a sequel for almost anything nowadays and even before now, Disney has been trying to cash in on their classics’ popularity by creating sequels, most of them direct-to-DVDs. I’ve seen some good ones (“Kronk’s New Groove”) and I’ve seen some rather bland ones. But, money is to be made so we will never stop getting these. Anyway, is “Return to Neverland” a good sequel to “Peter Pan”? Well, a long time ago I would’ve said yes, but watching it recently I am a bit teetering between the two common answers. If you want the short version, this movie is sub-par. Mainly for the fact that it takes eighty percent of its story from the original. Not many things stand on their own, except for the character of Jane and her predicament. She has a few aspects of Wendy, mainly because she’s her child, but she also has quite a bit of different ones. It all revolves around the fact that she doesn’t believe in any of the Peter Pan stuff. It is an interesting take because in the first movie, the kids that were taken by Pan went along with everything. Not Jane, well until the mid-way point. You have to have a lesson learned so of course she believes sooner or later, and it isn’t a spoiler because you see it a mile away. It is rather blunt too, which can be a con. Besides the character of Jane, there are three other pros to this story. The first is the animation. Sure, some of the 3D shots look a little outdated, but they aren’t complete garbage. The 2D holds up, though. Secondly, I like the portrayal of World War II. It felt like Narnia’s beginning story at some point, but they did a good job with the scenery of it. Finally, the last pro is the voice acting. Other than Peter Pan, everyone sounds the same as the original film. You may be thinking, “well how can this be a pro if Peter Pan doesn’t sound the same?” It’s because for his own take, Peter Pan sounds fine. I wasn’t expecting everyone to sound the way they did before so I got more than I expected. Before I go into my cons, I wanted to say what makes this a movie in the Nostalgia Lane Movie Marathon. There isn’t much memory that goes along with the fact that I remember watching it, but the place I watched this film first will always be in my head. I remember seeing this film when I used to live in the second house of my childhood. There are a lot of good memories in that home, and I recall watching this on a small TV in my room I shared with my brother, which had bunk beds. The funny thing is, with all of these film I’ve been watching in this marathon, I remember my reactions to scenes more than where and when I would watch them. It is a great tool to compare and contrast though. One thing that has changed is how I took a lot of things more seriously in this movie then I do now. With all that out-of-the-way, onto the cons. The first is how most things aren’t the most original. Peter Pan hangs out with Jane and shows her the lost boys, he wants her to be their mom, Tinker Bell gets jealous of her, we’ve all seen it. One thing I didn’t understand was how they tried to change a certain aspect. That aspect is the monster that goes after Hook. We all know him as a crocodile, but because they wanted a change, they made it an octopus this time. I get that they want to change things, but the octopus acted the same as the crocodile, so why not just bring the crocodile back and save us the trouble? Besides how unoriginal it can get at times, another con is things in this movie could never happen in real life. One example that comes to mind is when Jane is out with her dog in London while enemy planes are dropping bombs on the city. Who would let her go out during that time? And she wasn’t even scared either. These things can make me roll my eyes at the screen. Lastly, an issue I have is Peter Pan. I’ve never noticed this in the first movie (and maybe it wasn’t this way), but he was portrayed as a real jerk. I felt sorry for Hook more than anyone in this film. Everything Peter Pan did to him or Jane for that matter, made me mad. He isn’t really concerned for anyone throughout most of the movie. With your hero acting like this, who is there to root for? Overall, this isn’t a terrible sequel or Disney sequel. It isn’t as good as I remember, but isn’t that bad of a movie in general and I’m sure any kid will enjoy it. Plus, it is watchable for their parents. FINAL SCORE: 75%= Juicy Popcorn

2 responses to ““Return to Neverland””