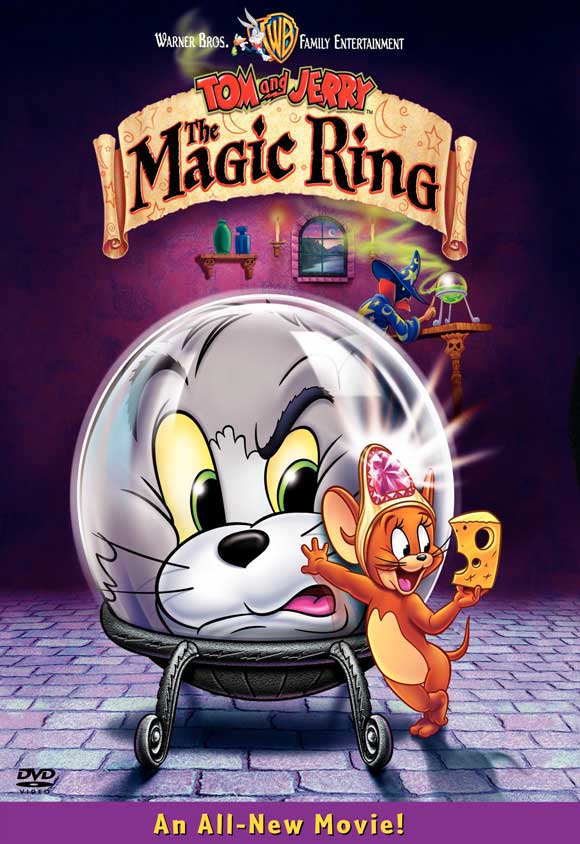 NOSTALGIA LANE MOVIE REVIEW: “Tom and Jerry: The Magic Ring” is voiced by Jeff Bennett (Johnny Bravo [TV series], Enchanted), Frank Welker (Scooby Doo, Where Are You? [TV series], Aladdin), Charlie Schlatter (Diagnosis Murder [TV series], Loonatics Unleashed [TV series]), Jim Cummings (Shrek, Catdog [TV series]), Maurice LaMarche (Futurama [TV series], Frozen), Tara Strong (Ice Age, The Fairly OddParents [TV series]), Billy West (Futurama [TV series], Jungle Junction [TV series]). It is directed by James T. Walker (DuckTales [TV series], Tweety’s High-Flying Adventure). Tom (Bennett) and Jerry (Welker) are at it again, but the stakes are even higher when Tom’s magician owner leaves Tom to watch on a magic ring while he is gone, only for that ring to get stuck on Jerry’s head. Once Jerry goes on the run from the magician’s house, it is up to Tom to retrieve it and get it back home before his owner arrives. 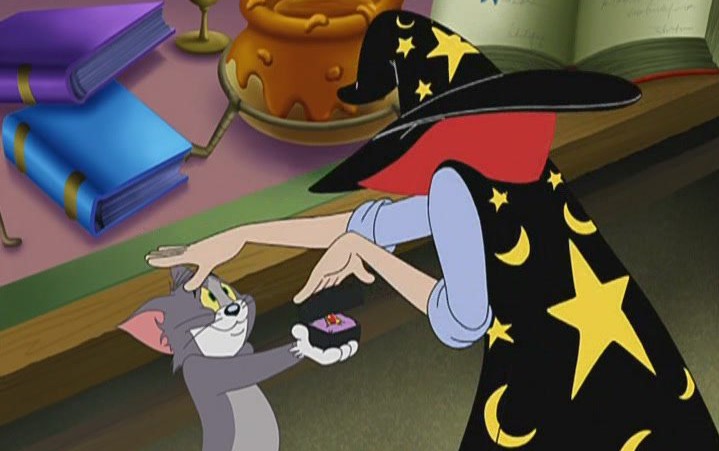 I was hoping that there wouldn’t be a bad movie out of this childhood box of memories, but unfortunately I have come across a dud. Not only a dud, mind you, but a disaster. Like the two recent films I reviewed in this marathon, I don’t recall certain memories attached to this flick besides the fact that I enjoyed it as a kid. Apparently I was a patient boy because this movie was too long for its own good, and in fact, it is actually the shortest movie in this marathon so far, rounding around an hour and two minutes with the commercials and credits tacked on (it’s a VHS). Before I delve into that thought, I want to get out the little pro clutter that I found. The first is that, some of the animation is good. An overall aspect of it is fine. The second is that some of the voice acting is good, mainly Billy West and Jim Cummings (notice I didn’t mention the titular voice actors). Finally, I found three parts funny, two of them belonging to Droopy the Dog. Now, onto what makes this movie trash. The main issue I discovered in this film is the whole execution of it. The story itself can be contained in a regular ten minute episode of Tom and Jerry, but unfortunately Warner Bros. believed that it can stretch into a TV movie. Like I said about the ten minute plot, the rest of the fifty-two minute story resides with boring chases and prolonged scenes. One example that comes to mind is a food scene. You know how when characters in a movie are sat down to eat, but they cut so you don’t really see them eating or dialogue is added in to get by? Well, because of the time slot this has to fill, I had to watch Jerry sit and eat cheese and crackers wholly in the beginning of this film. Another remark I have is that too many times did I witness Tom and Jerry sigh after being chased down or running and high-fiving when they got away. Also, most of the fight scenes with cartoon smashing felt too kiddy and dumbed down, not as brutal as the old show used to portray it. With that said, it was a task to get through this long ride to nowhere. I did laugh more than what I promoted in the pros, but all but three of them were because of the decisions made to create more run time of this forever of a film. Besides how long it was, this movie was just stupid. Almost everything about it made little sense and you have to switch off your mind to just get through the thing. From the beginning chase sequence to the ending chase sequence, it became repetitive really fast with added blundering humor that doesn’t hit for people above nine years old at all. The final thing I must discuss about this film (sorry for the short review, but there isn’t much to talk about) is most of the voice acting, mainly Tom and Jerry. What they do is they don’t make them talk, which they shouldn’t, but they give them sound effects. They sigh, they scream, and they laugh (too much actually) and none of it is good. Jerry sounded like Curious George and Tom sounded too goofy to even laugh with. It would be less of a problem if it was a background character, but come on, these are the main cartoons here! It is named after them! Hold up their legacy well or don’t even produce a throwaway movie. Even a good bit of this film’s animation looked thrown together and lazily drawn with most of the screen taken up by a singular color. However, after all that I said, I still liked it when I was a little kid so if you have kids, they may like this. Should you go out and pick this up? No, find a movie that is actually watchable for yourself so you can spend quality time with your child. But, if you come across it at a cheap price and need a new movie for your kid to watch, then knock yourself out, give it a try. They may like it. Until then, this is definitely a regrettable experience that disappointed me and my childhood. FINAL SCORE: 29%= Burnt Popcorn

2 responses to ““Tom and Jerry: The Magic Ring””