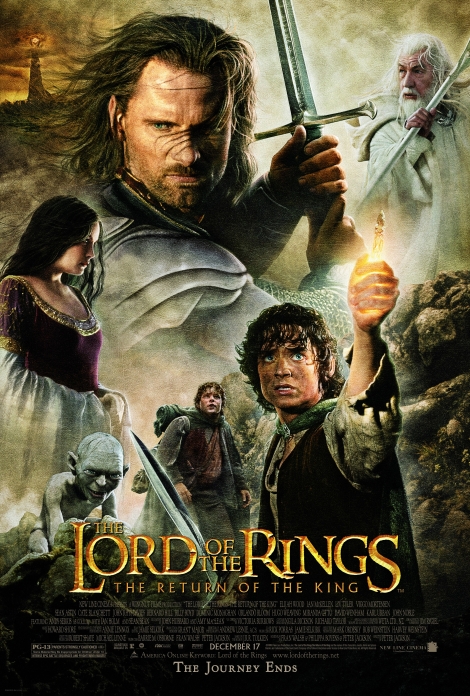 MOVIE REVIEW: I finally sat down to watch “The Lord of the Rings: The Return of the King.” It stars Elijah Wood (Wilfred, Green Street Hooligans), Sean Astin (The Goonies, Click), Viggo Mortensen (A History of Violence, Hidalgo), Andy Serkis (Dawn of the Planet of the Apes, Inkheart), Ian McKellen (X-Men, Flushed Away), Billy Boyd (Master and Commander: The Far Side of the World, Space Milkshake), Dominic Monaghan (Lost, The Millionaire Tour), Bernard Hill (Titanic, The Scorpion King), Miranda Otto (War of the Worlds [2005], What Lies Beneath), Orlando Bloom (Pirates of the Caribbean: The Curse of the Black Pearl, Troy), John Rhys-Davies (Raiders of the Lost Ark, Sophie & Sheba), Liv Tyler (The Incredible Hulk, Armageddon), Hugo Weaving (The Matrix, Cloud Atlas), David Wenham (300, Public Enemies), Karl Urban (Almost Human, Dredd), Cate Blanchett (The Curious Case of Benjamin Button, The Monuments Men), John Noble (Fringe, Running Scared), and Ian Holm (Ratatouille, Alien). It all comes down to this in the final movie of the epic trilogy. Frodo (Wood) and Sam (Astin) are finally approaching Mount Doom to destroy the ring, but a greedy Gollum (Serkis) is leading them in the wrong direction, trying to kill them and take the ring for himself. Meanwhile the Fellowship helps Gondor and Rohan to battle Sauron’s army in the Pelennor Fields, Minas Tirith, and the Black Gates in the last big battle of the Middle-Earth.

I put off seeing this movie for a long while after the second because of the movie length. I’ve said in my previous Lord of the Rings reviews that the run time for each is long, but this one is the longest, going for about 3 hours and 30 minutes. That’s a long time for a movie! But aside from that, this movie’s story did really well, having a great sign off to a great franchise. I thought the direction was done fantastically in this movie and felt good when it was finished because it left a good impression and it made me feel accomplished. For some reason, these movies have progressively gotten better with my favorites going from this one to the first movie in that order. The action was great, the special effects were awesome, and the acting was also great as always. Seeing John Noble in this movie was amazing because I always enjoy his performances. The only con in this movie in my opinion is the run time. I had to take a couple of brakes watching this because of how long it is. Just the regular theatrical version is tough to get through. This also sets up parts in the film that seem to drag in story which had me check the time a couple of times. This movie and franchise are all great and I recommend anyone to watch it if they haven’t! FINAL SCORE: 90%= Juicy Popcorn

2 responses to ““The Lord of the Rings: The Return of the King””