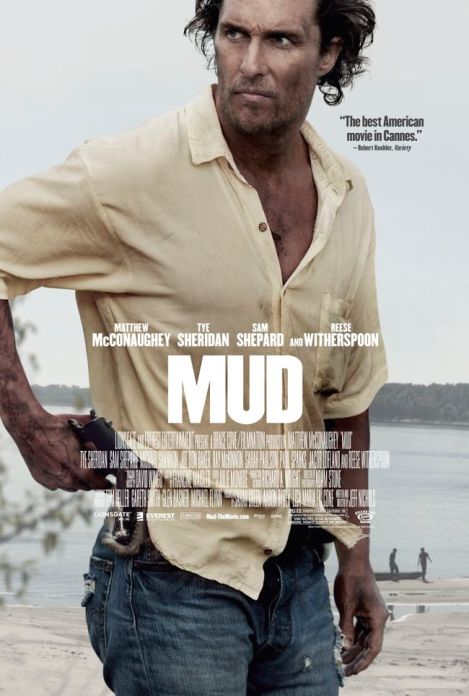 FRIDAY NIGHT MOVIE REVIEW: Last night I got to see the movie “Mud” starring Matthew McConaughey (Ghosts of Girlfriends Past, Fool’s Gold), Tye Sheridan, Sam Shepard (Safe House, Black Hawk Down), Michael Shannon (Man of Steel, Premium Rush), and Reese Witherspoon (Legally Blonde, Monsters vs. Aliens). It is about two 14-year-old named Ellis (Sheridan) and Neckbone that discover a boat up in a tree on an island on the Mississippi River. They want to take it down and keep it until they find a man has been up there that goes by the name of Mud (McConaughey). They bring food to him and soon learn that he is being hunted down by police and bounty hunters because he killed a man for being bad to his so called girlfriend, Juniper (Witherspoon). Ellis and Neckbone decide to help him to escape with Juniper by grabbing parts of the boat and sending messages from Mud to Juniper who is in town. It gets risky though whenever bounty hunters are on constant watch of Juniper, one of them being the brother of the man that Mud killed. Throughout the movie, Ellis struggles looking for a real example of love that he can believe in while learning about the risks of love and heartbreak. I enjoyed the movie. It was sad in parts of the movie, but it was pretty good overall. I thought that Ellis was a little out of it though since a lot of the scenes with him involve him running up to somebody and punching them in the face. FINAL SCORE: 84%= Juicy Popcorn