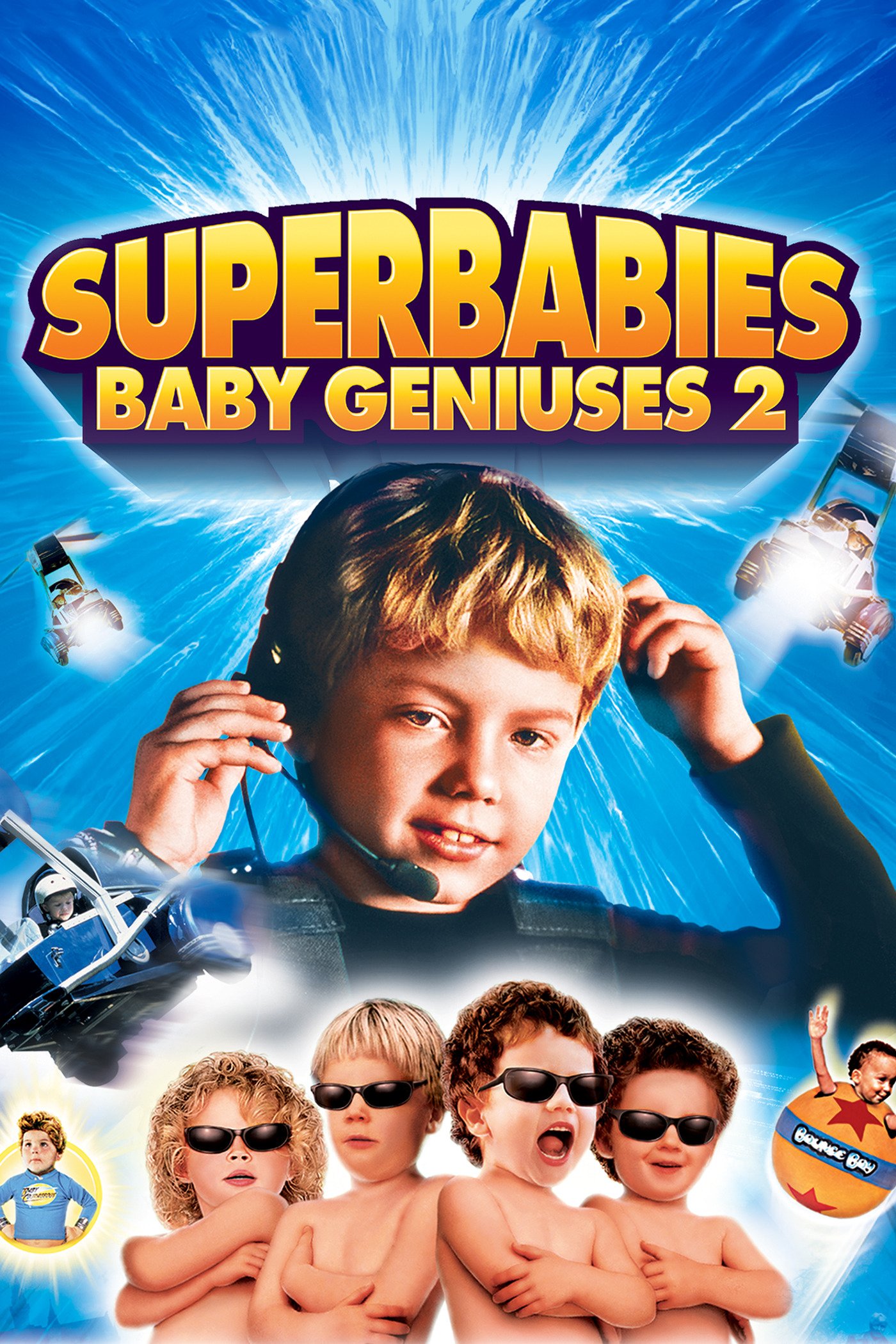 When an evil media mogul named Bill Biscane (Voight) seeks to broadcast a program that will brainwash kids, a group of intellectual toddlers enlist the help of the legendary Kahuna (Fitzgerald) and his super baby powers to save the world.

You know what the kids want to see? A movie about babies. But not just babies, no sir. Super babies. And to top it all off, they’re geniuses too.

Amongst the classic, beloved titles my childhood had to offer, there are admittedly some that are more… lackluster. For those of you who don’t know, there was this film that came out in the late 90’s called “Baby Geniuses” that took the world by storm. Well… maybe it did. I have no idea. It clearly made enough money to spawn several sequels, chief of which being the second one that I am currently analyzing. These flicks follow babies who are smart, or at least babies who can communicate with each other (“Rugrats” anyone?) and conquer the obstacles that stand in their path. I believe I watched the original once; from what I recall, there was a terrifying, gigantic robot baby that sought to harm the actual babies (demented stuff). Apparently, my parents didn’t find that one to bring the kiddos enjoyment, so they decided to saddle them with the sequel where all the babies get superpowers. And as a toddler, it’s gives you some great role models.

Guys, I gotta tell you, I dreaded having to watch this. Though it’s been a long while since I’ve seen the film, I knew how bad it would be. The scenes I once believed to be fun and cool were actually cringey, hilarious (in not the best ways), and poorly structured. Sure, there’s a clear mission and obstacle. The babies have to stop a Nazi-like television mogul (played by Jon Voight) from broadcasting a program to all households that brainwashes kids, and the only way to do so is to find help in a super baby legend known as the Kahuna. However, the means to go about everything hinges entirely on coincidence and matter-of-fact. Many questions arise in this narrative, as everything falls into place quite easily just to get us moving along this silly plot. I know guys, it’s a kids movie, and kids don’t care. But what else am I to do here?

If you find yourself sitting down to watch this tragedy of baby-size proportions, you’ll find quite a few issues, chief among them being the obnoxious ADR over the entire picture. In the industry, they say there are two types of subjects you should never work with: kids and animals. And boy, are there a lot of kids. Some of which are clearly three or four years old. The whole time I’m watching this, I’m wondering how the shoot days were; especially for the director, since he has to communicate what he needs to get from these babies. All of their talking is done in post-production and laid over their lips that are obviously speaking gibberish (or in some cases, CGI lips when the babies won’t say anything for the camera). It’s hard to shake, and can be distracting from the narrative… whatever there is to gather from that.

The filmmakers tried their best with what they were given. At the very least, I can say that they did an alright job in production design as well as fight sequences. Sure, they’re clunky (and you can kind of tell when there is a stunt double), but they keep things somewhat engaging or liven the mood of wanting to turn off the TV altogether. There’s even some moments where the filmmakers seem to poke fun at their own story, to which I applaud. Because at the end of the day, we know what we’re getting into when we see the title of this (and the poster of shirtless babies in sunglasses, almost all of which are not characters in the movie). One thing to note though is that there is this one scene in the whole film that was interesting. It stuck with me as a kid, and I somewhat figured it would be decent now, and that is Kahuna’s backstory. How he got his powers, the relationship he had with his dad and brother, and being cursed to live out his days in the body of a ten-year-old was honestly fascinating. It was a somewhat powerful scene that made me wish we focused more on that as a story. Alas, we must accept the fate of instead watching drooling babies who make fart jokes.

“SuperBabies: Baby Geniuses 2” leaves you winded from watching it much like you would be from reading the title. I had some fun in seeing the chaos and lunacy that unfolded, but it’s certainly something I wouldn’t want to see again. There is a good message to it at the end of the day, one that kids could grapple to, but the audience pool of this flick is incredibly small. I know that I enjoyed the superpower aspect of the feature when I was growing up, but in a world of far superior superhero movies out there, it’s tough to place this on top of the heap to show to the kiddos. The filmmakers did what they could, and I commend them for at least giving me something fun as a young kid to watch. But when you start pushing ten, the super babies aren’t as cool anymore. It’s best to leave this one on the shelf to collect cobwebs. FINAL SCORE: 25%= Burnt Popcorn

One response to ““Superbabies: Baby Geniuses 2””