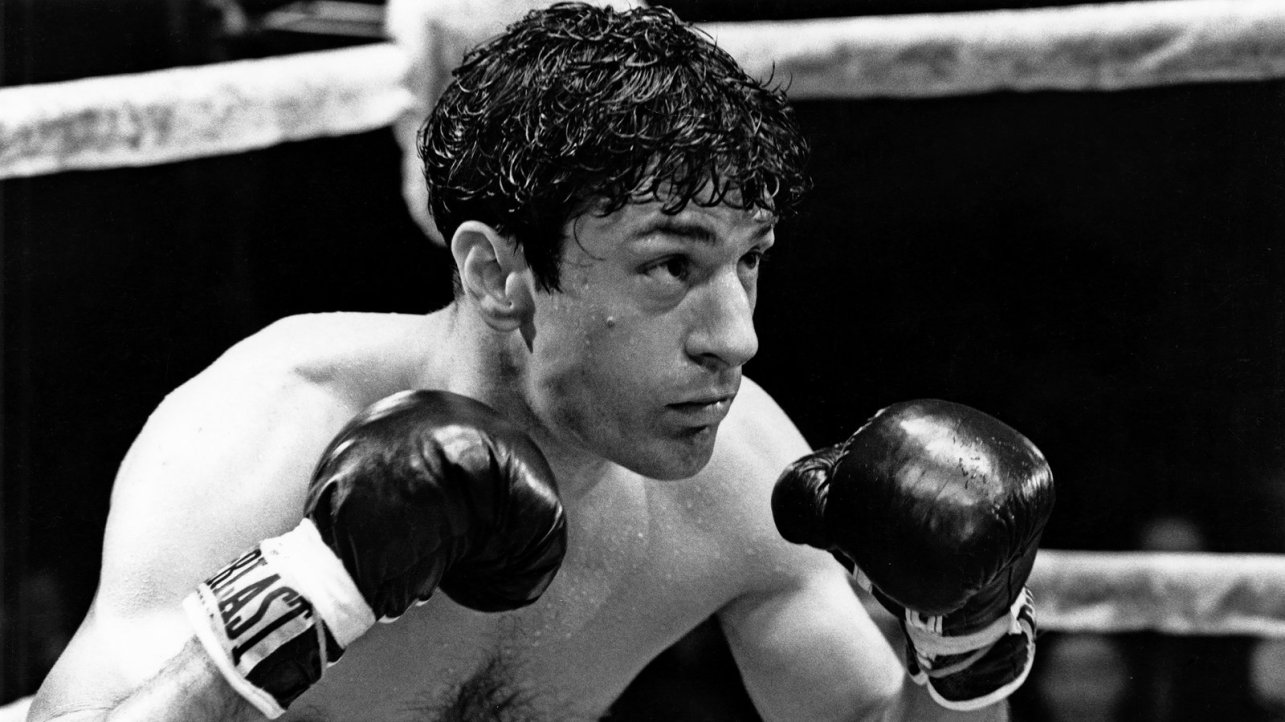 The marathon has led us to this. “Raging Bull.” One of AFI’s top 100 films of all time, the Scorsese-directed, De Niro-led feature has been hailed as an American classic, shaping the standard boxing movie into something no one has seen before. Prior to this marathon, I have never seen it. Now, I have. On the outside looking in, I figured there wouldn’t be much to explore with “Raging Bull,” having already seen six “Rocky” films and the first “Creed” (not to mention “Grudge Match” and even Kevin James’ “Here Comes the Boom” if you wanna throw in a taste of UFC). However, I was proved wrong. “Raging Bull” and “Rocky” are night and day, telling a different kind of story in a different way. You see, there’s a mislabeling when it comes to “Raging Bull.” It’s deemed as a sports film, and while it does have boxing in it and a boxer is our main character, it is more so a character study than anything. The rise and fall of Jake LaMotta is a true story, and one that is brutally showcased in this black-and-white picture. Both inside and outside the ring offers compelling drama, shouldered by a flat-out astounding performance by De Niro that is simply his best (from what I’ve seen). He goes all out in this, getting both lean and gaining weight to transform himself on the journey real life LaMotta took. It’s one of those pieces that, while not the most legendary thing you’ve seen, leaves you talking about it with peers. Very few movies do this, but I even found myself not blinking for long periods of time while watching it. “Raging Bull” is a compelling piece of cinema, primarily because of its lead actor and terrific direction. The cinematography is fantastic, especially the boxing sequences. Scorsese had a rough time capturing violence in “Mean Streets,” but he perfects it here, showcasing boxing in a way that you’d have to see to believe. It left my body tense, it was so good. The drama that surrounds LaMotta outside of the ring works well too, as it seeks to capture the kind of man LaMotta was: paranoid, hot-tempered, and hardheaded. It’s a role De Niro is familiar with, as he played similar bills in both “Mean Streets” and “New York, New York” (though one the latter, he was all over the place). Much like Scorsese perfecting his fight scenes, De Niro perfected the jerk. There was a complete tug-and-pull of both hating the guy and feeling sorry for him. Not only do we get to catch a glimpse into who this boxer was, but also boxing in general, and how it was related to the mafia. In classic Scorsese fashion, we have a mafia, who pull the strings behind the scenes of the boxing world. It’s very interesting; a layer amongst many of this piece. The question now is… does it beat “Rocky”? In short? No. For me, while “Rocky” may not be as in-depth, I felt more for the lead character and a better push behind his goal. With “Raging Bull,” you’re getting a deconstruction of a character who is severely flawed, and while it’s well-done, it isn’t completely perfect (as some critics have deemed it). The goal of this film is abstract, to paint a picture of who LaMotta was and the times that were, in regards to boxing. It’s certainly one of the best Scorsese movies I’ve seen, no question. It’s one I’ll more than likely rewatch from time to time. But it’s not his best, and I believe that boils down to taste. “Raging Bull” is a classic piece of cinema that holds up, reshaping the boxing flick and developing a captivating character. It may not reach the highest of scoring, but I recommend anyone to see it. FINAL SCORE: 93%= Juicy Popcorn

One response to ““Raging Bull””