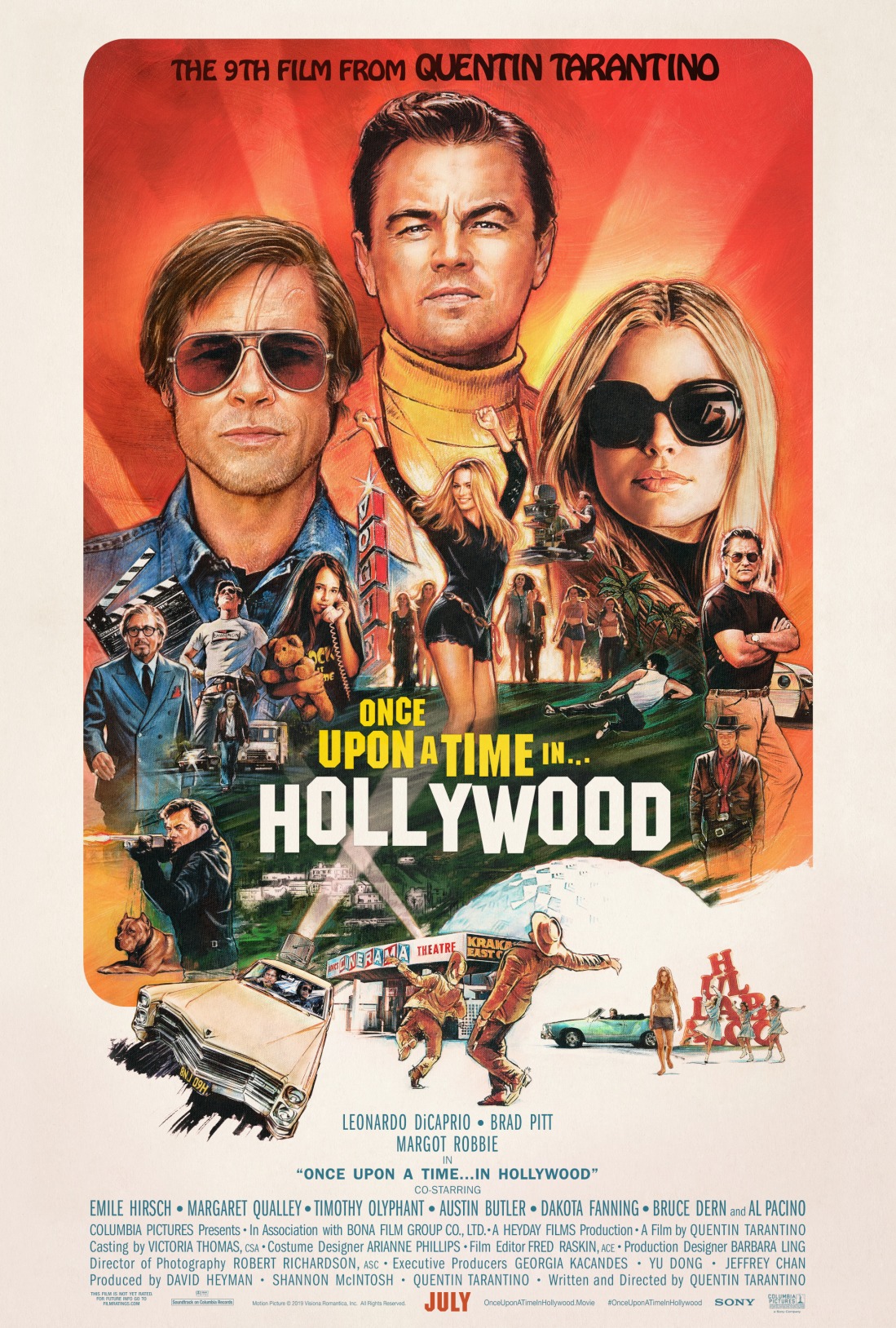 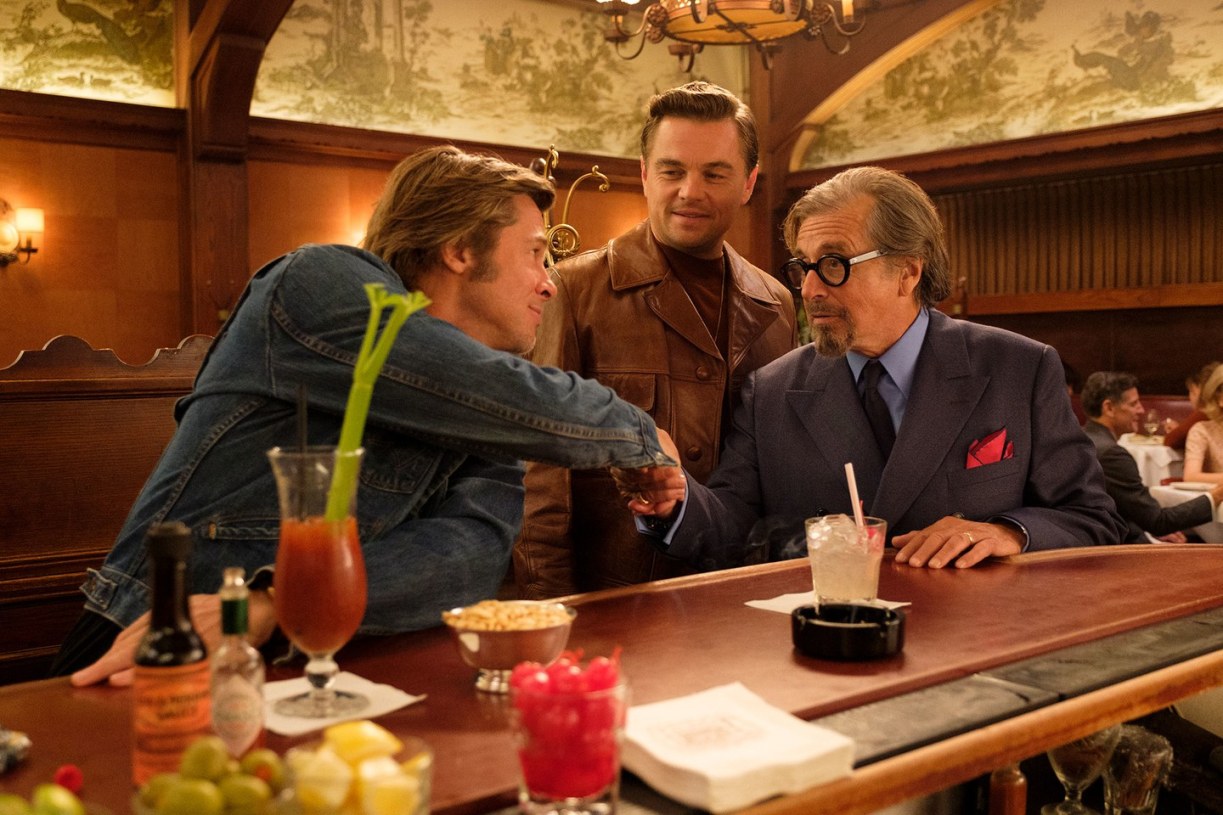 It’s my most anticipated film of the year. The trailer I’ve seen five times over in the few hours it was release. “Once Upon a Time… in Hollywood.” I cant begin to explain to you all how much this movie screamed “me.” The time period, the subject matter, it’s all what I crave, and it’s all here. Around the time the film was announced, I had only seen one Tarantino movie: “The Hateful Eight.” Since then, I’ve been cramming in a few of his features this summer in preparation for a marathon (which will be dropping soon). I wanted to get in the headspace of this director; dig into his style, see what makes him tick. So far, I have been thoroughly impressed. This man LOVES filmmaking, and it is clearly present in his stories and how he shoots them. The expectations for this film just grew and grew. I knew I had to see it in theaters, and thankfully I got a chance to. Needless to say, it is the most non-Tarantino movie I’ve ever seen. What do I mean by that? It’s fairly tame, keeping away from over-the-top blood, crazy characters, and intense situations. You’ll find some of that in this, but it’s in short supply. “Once Upon a Time” is nothing like Tarantino has ever made, yet I feel like it’s the picture he’s been wanting to make all along. It’s a love letter to classic Hollywood, set in the 60’s yet absorbed in culture that spans as far back as the 40’s. Researching Tarantino himself, this is where his biggest inspirations come from; he’s a huge cine-file, and there’s so much detail poured into this movie that you can watch it several times over just to catch references you may have missed. The work put into “Once Upon a Time” is spectacular, it’s aesthetic is clearly the best part of the experience. I loved getting transported back, and while I never lived during that time, it was amazing to watch as a filmmaker and film lover. You can see stars of old making appearances as well as the style and trends of the day coming front and center. It’s beautiful and eye-candy; heck, it’s enough to warrant a recommendation. But that’s not the only thing that makes up this film. The performances in this are top-tier. I mean, you’re working with some of Hollywood’s finest. DiCaprio, Pitt, Robbie, Pacino Dern, Olyphant, Fanning; need I say more? This is jam-packed with brilliant talent giving a great experience that’s fun and enjoyable. DiCaprio and Pitt have fantastic chemistry, and work very well together. Of course, in true Tarantino fashion, they aren’t the only pieces in play, as we also get a look into Sharon Tate’s (Robbie) life, as well as the Manson family. Oh no, this can’t be good. But Tarantino will surprise you with how he plays out this story. It’s often unpredictable, mainly because it doesn’t have a drive. Really, the movie is made up of scenes meant to flesh out the time era (and its characters, but not as much), never really aiming towards a singular objective. Sure, DiCaprio’s Rick Dalton wants to get back in the spotlight again, but that’s about it. The rest is more so an experience in the life of Hollywood 1969. That’s the biggest character, and takes place front and center for us all to see. I loved all the nuances, though I will say the time put into cramming everything beloved by Tarantino can make the story feel like it meanders from time to time. I never checked my watch, but I will say I was a tad let down. The biggest issue I found with this film was really how there wasn’t much character development. Usually, we get to know Tarantino’s characters well through circumstances they are put in. And while our heroes are put through the ringer a lot in this, I never really got the know them. Aside from Rick Dalton, I gained little from the characters, primarily Pitt’s Cliff Booth. He was a cool guy, but I got to know very little of him. If there was anything I wished to receive from “Once Upon a Time,” it’d be more one-on-one time with its characters. By the film’s end, I walked away with feelings I never expected. I saw this with Captain Critic, who put it best by saying the feature is “methodical.” The true objective is immersing our culture back into that wonderous time of the 60’s in Hollywood, and while that is fun, it takes time away from the characters. Don’t get me wrong, I loved the feel of this movie. I was in awe the whole time, but I was also detached. Towards the third act, everything built by our characters was quickly written off by a narration from Kurt Russell (which was added in odd places early on), never really giving me much closure to these people. Was that intentional or just not important to Tarantino? I’ll never know. All I can say is, whatever you think “Once Upon a Time” will be, leave it at the door. It’s Tarantino’s most tame, and while I find some of his stylistic choices to be too wacky, I missed it from time to time in this. The final ten minutes, however, were true Tarantino, and by far a radical pay-off to the story. Overall, “Once Upon a Time” is aesthetically picturesque, with brilliant performances, awesome music, great moments, and a rich dedication to cinema history. It’s not Tarantino’s best work, nor does it carve into the characters as much as I’d want, but I’ll say that it was a great experience nonetheless. FINAL SCORE: 90%= Juicy Popcorn

One response to ““Once Upon a Time… in Hollywood””