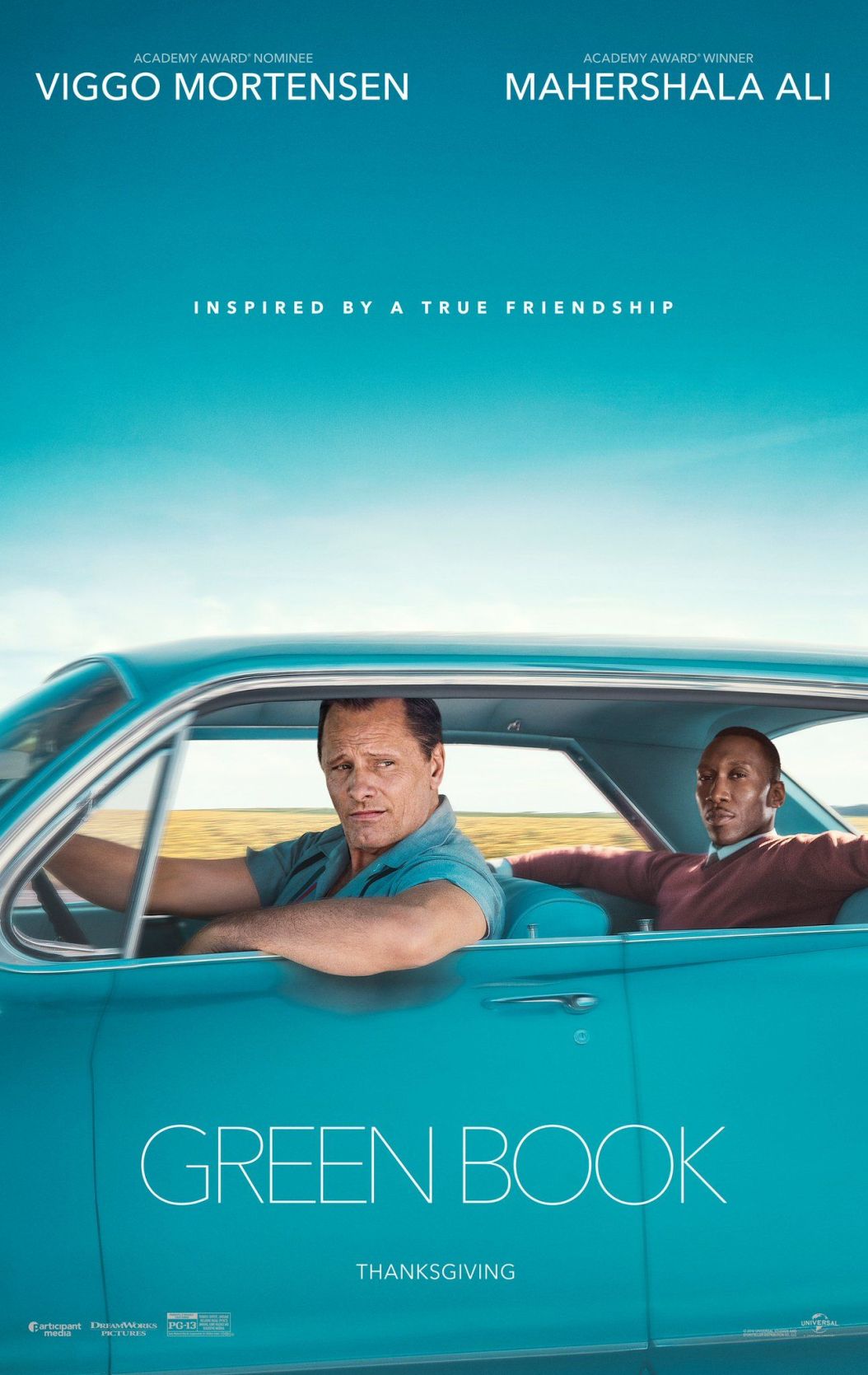 MOVIE REVIEW: “Green Book” stars Viggo Mortensen (The Lord of the Rings: The Fellowship of the Ring, Captain Fantastic), Mahershala Ali (Spider-Man: Into the Spider-Verse, House of Cards [TV series]), Linda Cardellini (Avengers: Age of Ultron, Scooby-Doo [2002]), Sebastian Maniscalco (Tag, Cruise), Dimiter D. Marinov (Baskets [TV series], The Americans [TV series]), Mike Hatton (Vigilante Diaries, Shoot the Hero), and Brian Stepanek (The Suite Life of Zack and Cody [TV series], Young Sheldon [TV series]). It is directed by Peter Farrelly (There’s Something About Mary, Dumb and Dumber), who also wrote it with Nick Vallelonga (Choker, The Corporate Ladder) and Brian Currie (Two Tickets to Paradise, River of Fire). Based on a true story, this film follows an Italian-American bouncer who is hired by an African-American pianist to drive him cross-country to his various gigs, all the while forming an unexpected friendship in the midst of the 1960s American South. 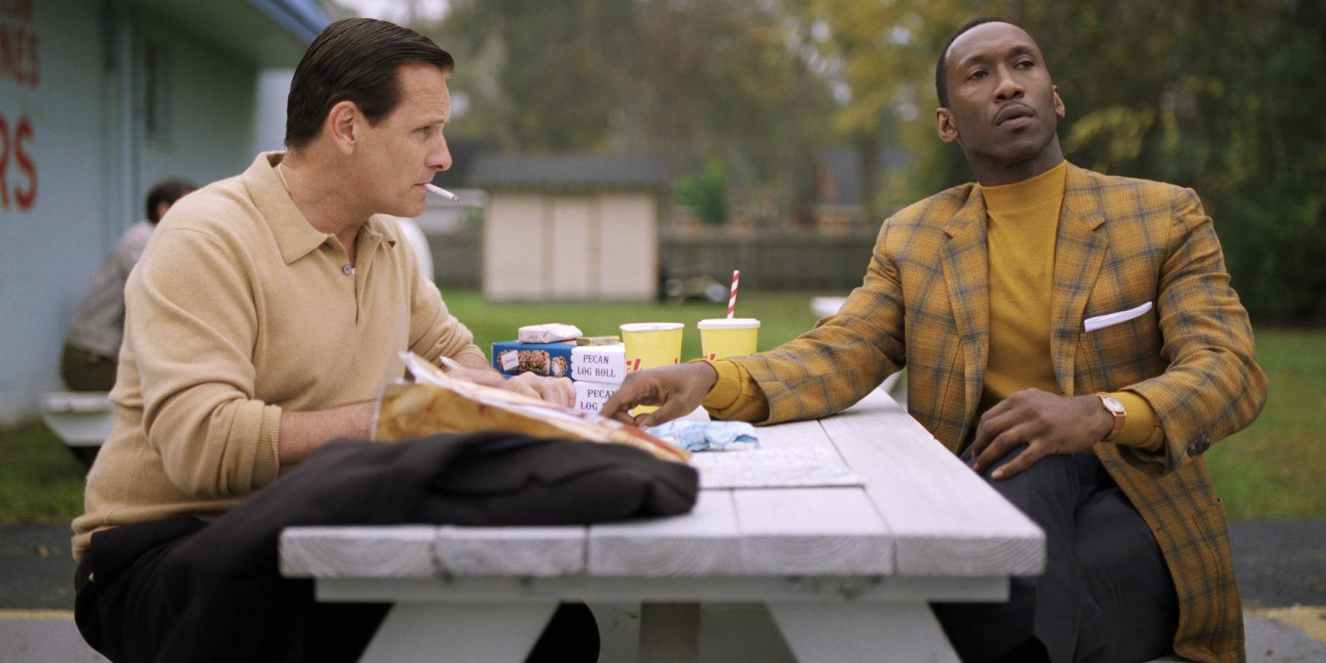 I’ve seen quite a bit of movies in my lifetime. After a while, it’s easy for many films to seem alike, enough to warrant cliches, tropes, and sub-genres within the big categories we have already defined movies in. When I saw the trailer for “Green Book,” I figured it to be another flick preaching on how poorly black people were treated back in the day, utilizing many aspects and dialogue moments I have seen repackaged time and time again. Don’t get me wrong, I’m not downing films that shed light on tough subjects; we need these movies, but what I don’t care for is repetitiveness. You can make as many films as you want depicting how things were back in pre-segregated America, but what’ll make you stand out and actually make a good product is showing us what we haven’t before. After seeing “Green Book,” I can safely say that I was impressed with how different it was. Obviously, you know what you’re getting into. A hardened Italian forms a great friendship with a black musician in the early 60’s as they hit the road together exploring various circumstances involving racism that strengthen their bond. I was expecting something preachy, potentially lazy filmmaking that falls on the simple concept of showing how people can be racist and how it is bad. However, the focus of this feature was not just on how this time affected Dr. Shirley (Ali), but also the development of him and Tony (Mortensen) as characters. It’s a character piece at its core that depicts two men struggling with their own issues. Tony is a foul-mouthed, sloppy guy who can’t seem to control his temper, while Dr. Shirley never allows himself to enjoy the splendors that life has to offer him (let alone open up to anyone), opting to seclude himself from the world and it’s personal interactions. It was these character arcs that I loved seeing carved out. Instead of watching a movie on race, I was seeing a film about two people being changed by their friendship with one another. Does that mean that there weren’t elements of racism involved? No, that was a strong backbone in this story, but not so much that it made everything come off as an afterthought or hollow. The acting was superb in this. You couldn’t as for better actors than Mahershala Ali and Viggo Mortensen. Their chemistry was genius and they were clearly the best parts of the film (it was also nice to see Sebastian Maniscalco, a hilarious stand-up comedian, on the big screen). I loved the cinematography and atmosphere of it all as well. You know me, I enjoy a good period piece, and the filmmakers delivered on capturing the look and feel of the early 60’s, a very beautiful era in terms of cars and clothing. The music was also good too, as there were plenty of moments given to piano playing and tunes that would’ve been played during that time. There’s a lot about “Green Book” that’ll make you smile and feel emotionally invested. It’s a solid adventure to see played out, and I’m happy that it wasn’t a dud. In terms of problems I had with the movie, it would be regarding character of Dr. Shirley. There were two aspects about him that seemed to be out of left field or never paid off, to the point where I noticed and was shocked. The first is a scene that depicts him as being a gay man, but past that moment there is no mention of it; it’s quickly dropped, and I couldn’t help but wonder why the filmmakers would even put it in at all (other than the fact to just make him more of an “appealing” character to modern audiences). The second is an ongoing arc involving him and his brother, who is only mentioned in conversations. Shirley has been regarded as a man who won’t confront past problems with his folks, making you think that by the end he will have changed and reach out to his family once more. Unfortunately, that is not the case. We get a happy ending, mind you, but the fact that Shirley doesn’t contact his family makes all those moments mute. I would’ve liked a pay-off, and I think the filmmakers missed their opportunity (the real family of Shirley even stated that they weren’t as estranged as the film depicted). Overall, I really enjoyed watching “Green Book.” It had a “Driving Miss Daisy” feel for a modern audience, and I would recommend people to see it. FINAL SCORE: 91%= Juicy Popcorn

One response to ““Green Book””