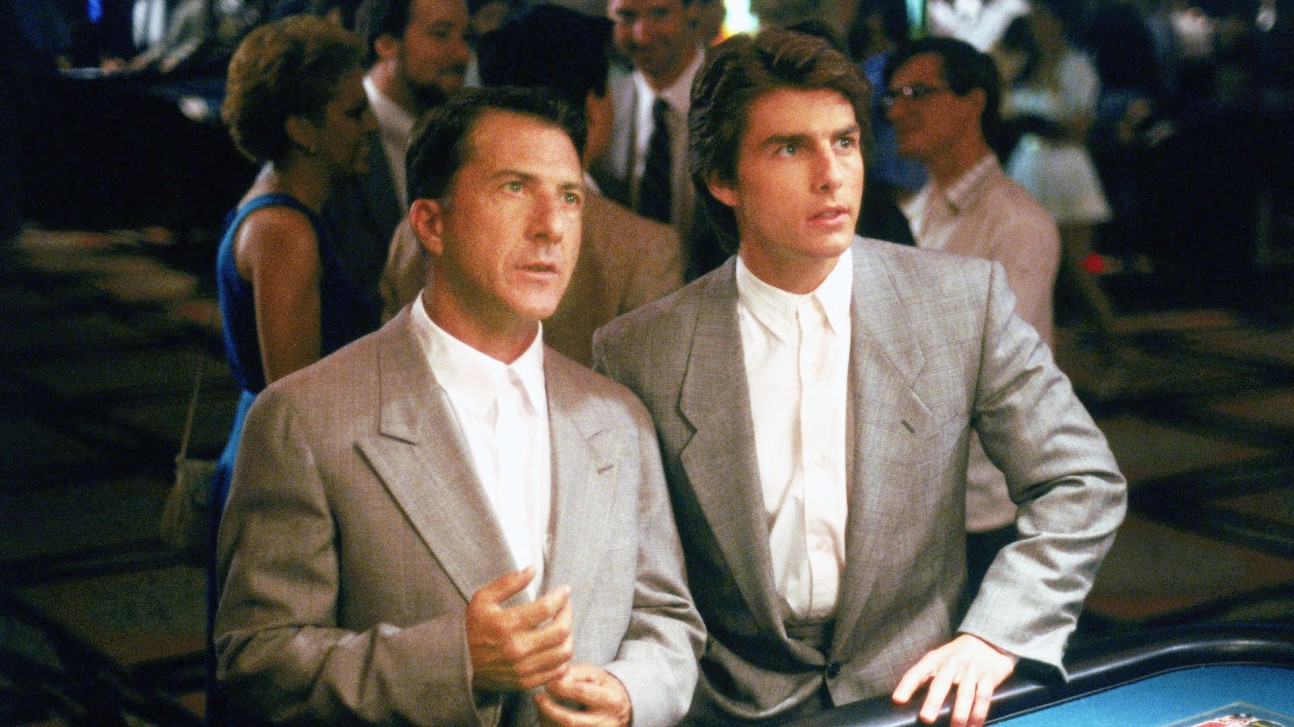 “What you have to understand is, four days ago he was only my brother in name. And this morning we had pancakes.” I’ve seen many Tom Cruise pictures in my life; the action flicks, comedies, and dramas. However, very few have touched my heart as much as “Rain Man.” The story of a hotshot named Charlie having to spend a week with his newfound, autistic older brother named Raymond is one of frustration, chaos, and redemption, all of which foils into a beautiful message about finding oneself through complicated, messy means. There was hardly any story in the narrative. It was really just a long road trip movie from point A to point B, but that wasn’t the reason for this film’s existence; it was the characters and their chemistry. I want to just say that the relationship between Charlie and Raymond is one of the best in cinema history. Cruise and Hoffman…golly day, they were astounding. It was as if I was watching Charlie and Raymond rather than the actors themselves. Their moments together were harsh, endearing, and heartbreaking; they made me tense up, laugh, and even tear up because of how genuine they were. You couldn’t have asked for better performances, nor better writing to embody them. The dialogue was engaging, yet simplistic. It was Raymond’s personality that drove a lot of the conflict and resolution. Most of what happened revolved around him and created a domino effect that would transform Charlie as a result. It’s a fascinating approach to character development because only one of the figures is actually changing over the course of the runtime. Sure, the concept may have been done before this (and most likely after), however “Rain Man” established itself as an original, heartwarming feature regardless. At the end of the day, this is a character piece built around wonderful, cinematic moments and an interesting musical score composed by Hans Zimmer (who made a big break into the business with this feature). Some of my favorite scenes consisted of the Cruise blow-up scene over underwear, Charlie and Raymond dancing, and the final moments towards the end. Really, the only things I would say would be an issue are the predictable message and the character of Susanna (Golino). The con residing in the message is rather minuscule; more so a nitpick of how I could guess Charlie would be a changed man by the end. What are you to do? If he didn’t change, the conflict would still be there and closure wouldn’t have been given. When it comes to Susanna, I could say the same. She wasn’t too much of a problem, and even pushed the plot along in a few moments, but in others she felt like a filler character. I enjoyed the parts where Cruise and Hoffman were bonding alone, and subsequently some moments involving Susanna would seem unnecessary. Like I said, this is a small issue, because for the most part she was needed. It’s just in some instances she resembled a filler character. Overall, I thought this was a fantastic feature; definitely one of Cruise’s best. His chemistry with Hoffman is one for the ages, and I couldn’t help but grow attached to them towards the bittersweet end. The story was subtle and slow-moving, yet built towards something meaningful and cinematic. The conclusion in turn was poetic and loving, one that I will remember for years to come. If you have not seen it, I implore you to check it out. FINAL SCORE: 95%= Juicy Popcorn

One response to ““Rain Man””