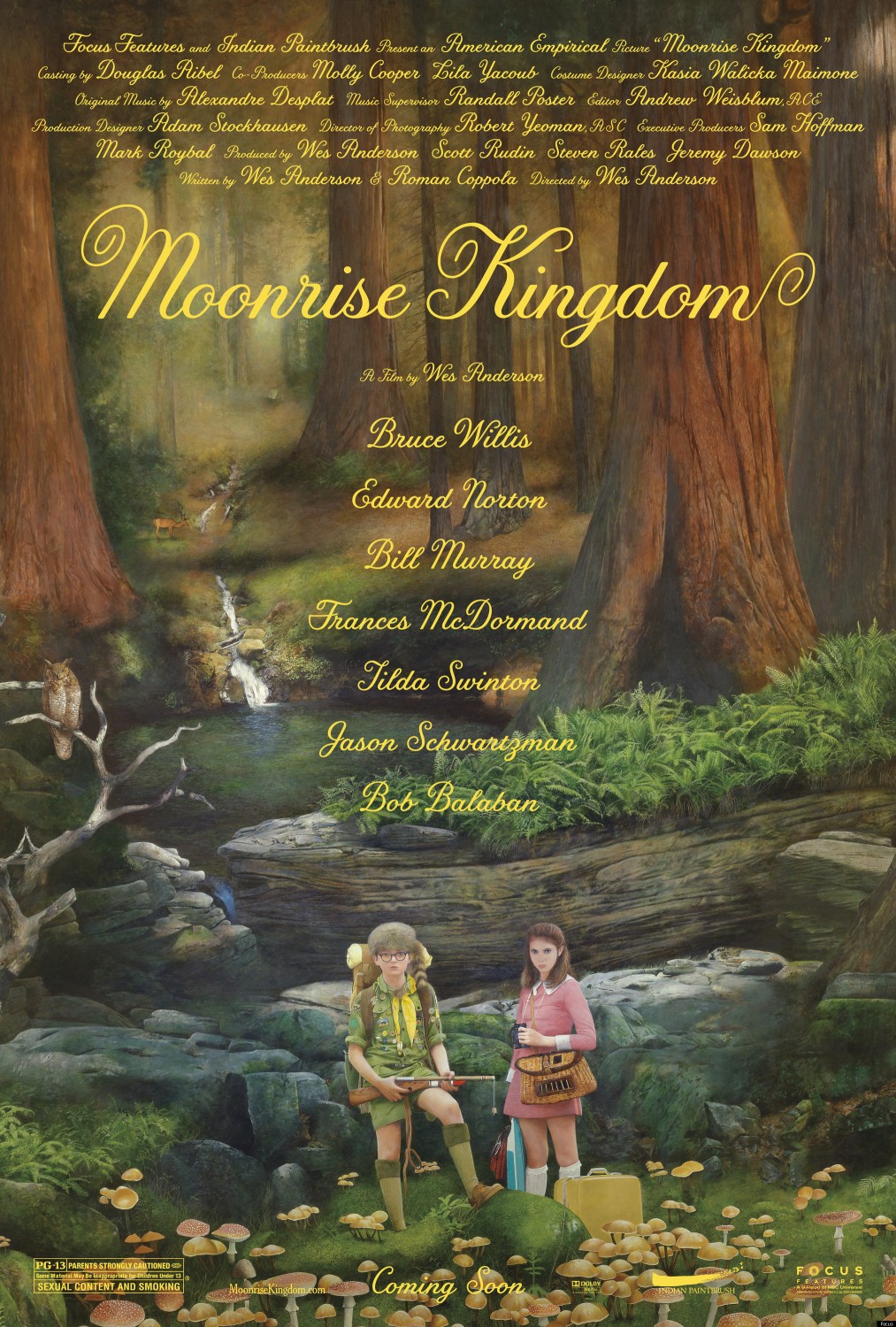 MOVIE REVIEW: “Moonrise Kingdom” stars Bruce Willis (Die Hard, The Sixth Sense), Edward Norton (Fight Club, The Incredible Hulk [2008]), Bill Murray (Groundhog Day, Ghostbusters [1986]), Frances McDormand (Fargo [1996], Blood Simple), Tilda Swinton (Snowpiercer, Adaptation.), Jared Gilman (Elsa & Fred, No Letting Go), Kara Hayward (The Sisterhood of Night, Fan Girl), Jason Schwartzman (Rushmore, The Overnight), and Bob Balaban (Close Encounters of the Third Kind, Ghost World). It is directed by Wes Anderson (Bottle Rocket, Fantastic Mr. Fox), who also co-wrote it with Roman Coppola (The Darjeeling Limited, A Glimpse Inside the Mind of Charles Swan III). Set in the 1960s on a small island, a young boy scout named Sam (Gilman) runs away from his troop to elope with a young girl named Suzy (Hayward). Although they are in love, many forces will try to break them apart, as Sam’s troop and the island’s only policeman (Willis) set out to find the two lovebirds. 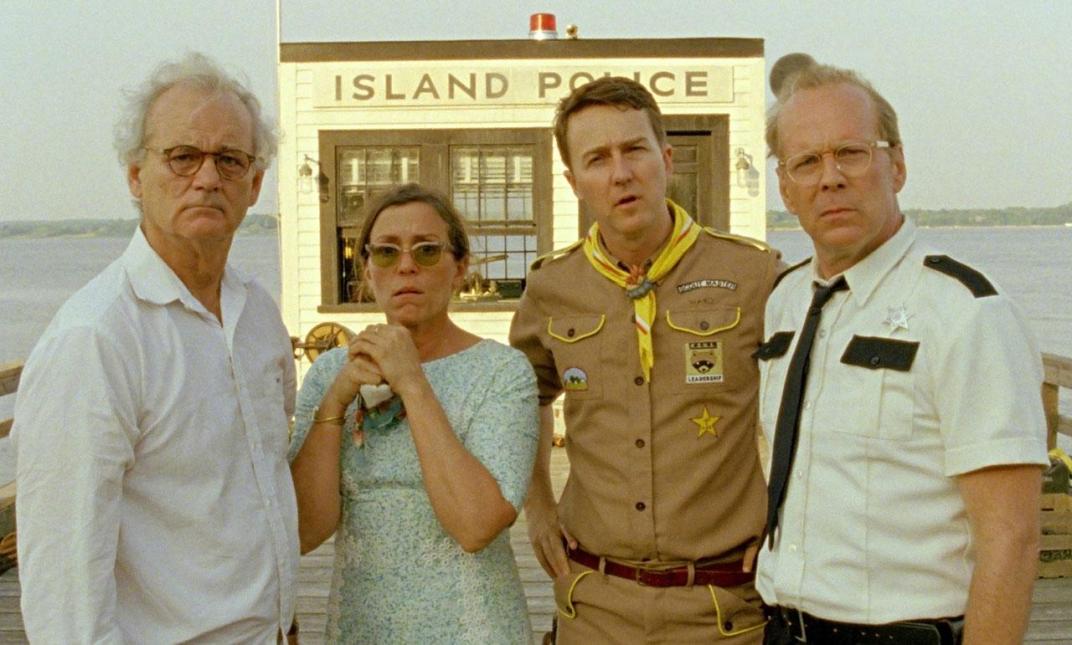 So far, I have reviewed two films by Wes Anderson: “Bottle Rocket” and “Fantastic Mr. Fox.” No matter what scores I have given those releases, my general consensus for them both were that they were fun. Wes Anderson has a certain style that gets imprinted on each of his movies, for those of you who don’t know, and I find it to be a treat to watch his masterpieces. From his use of bold yellows and browns to his straight-forward, expanded camera angles of individual rooms, the way Anderson’s films work is its own beast. We don’t get any less of that in this movie I recently saw of his, entitled “Moonrise Kingdom.” Zany, quirky, authentic, and bright are the best adjectives to describe this release, as we are transported back in time to the sixties where two kids fall in love and the world tries to tear them apart (if by world you mean family and friends). I’m not going to lie, I loved this movie. As I do with all Anderson films (this is my third), I let this movie engulf me, take me on a journey that I have never been on before. Sure, love stories have been said and done many times in cinema, and Anderson’s style is all but new to me, but when you combine the two together, you get something special. It was nice to just sit, relax, and even laugh at a film with so much charisma and charm. The characters, setting, and dialogue were so unique, and often innocent. Even though the story leaked with many saddening subplots like adultery, the way it was executed was so clean-cut and carefree that I could actually enjoy the experience. It was like it was written by a kid who was too smart for his own good, yet still had some personality infused into the plot which gave it innocence. Sorry if it’s hard to grasp what I’m getting at, but once you watch it you’ll understand. In breaking down the film, let’s talk about the plot. In all sincerity, this isn’t a perfect story. It has its kinks and nitpicks, but overall it was great to see unfold. Like I said, Anderson movies are fun, and no matter how odd or off his stories are, I still have a swell time. The strong relationship between our two child leads is lovely to see take place, and seeing the small island scurry around to find them is too much fun. In Anderson fashion, we have some crazy moments; certain pieces of dialogue that seem out-of-place, but make the plot all the more lively. For example, there is a scene in which Suzy’s siblings are sitting on the floor doing something. All of a sudden, Bill Murray comes down without a shirt on and wine in one hand, searching for an axe so that he can chop down a tree in the middle of the night. It’s this kind of stuff that puts spark into our characters and their situations. It is so different, fresh, and out-there that only people with certain taste would truly appreciate this release. Not that I’m saying that those who don’t get it are stupid. I’m merely stating that Wes Anderson isn’t everyone’s cup of tea. In talking about the characters, I adored them all. Bruce Willis’s cop was sad, but cool to watch in his dilemma, Edward Norton’s scout leader was funny and odd, Bill Murray was…well…Bill Murray (can’t go wrong with that), Francis McDormand did great, and the rest did just as good. Even the kids did a wonderful job, especially the two leads. I wonder where Hollywood will take them next. All of the characters offered their own slice of life to this crazy pie, and I loved seeing their conflicts clash when the young lovers run away. When talking about the cinematography, it’s the best part of any Anderson film. I’ve pretty much described it at the top of this review, but it goes without saying that the man is a genius, and I crave to see more of his works. The music he chose for this was great as well, on a side note, with many string instruments and choir children singing. It’s everything that gives an indie film it’s touch, and I was soaking it in. To be placed in the sixties was a nice spin on things. In terms of what went wrong with this release, there wasn’t anything too major. The first thirty minutes weren’t as great as the rest of the movie, and that was because it had a hard time launching us into the problem, but once we reach the hook, it was a blast. Anything else would be nitpicks. This wasn’t the greatest Wes Anderson film I have seen, but it was surely a movie to remember, as I had fun and enjoyed every aspect of what made this story special. I recommend anyone to check it out. FINAL SCORE: 92%= Juicy Popcorn

One response to ““Moonrise Kingdom””