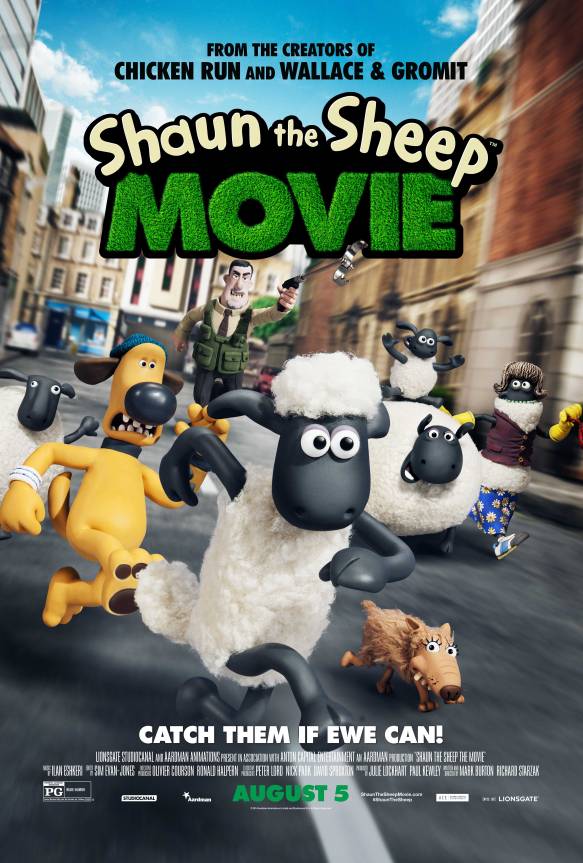 FRIDAY NIGHT MOVIE REVIEW: Two milestone markers hit this year, first the 200th review with “Avengers: Age of Ultron” and now this 300th review of “Shaun the Sheep Movie,” which is voiced by Justin Fletcher (Gigglebiz [TV series], Timmy Time [TV series]) and John Sparkes (Peppa Pig [TV series], Calendar Girls). When Shaun’s (Fletcher) owner, the farmer (Sparkes) ends up in the big city from their shenanigans, it is up to him and his herd to find him and bring him home. 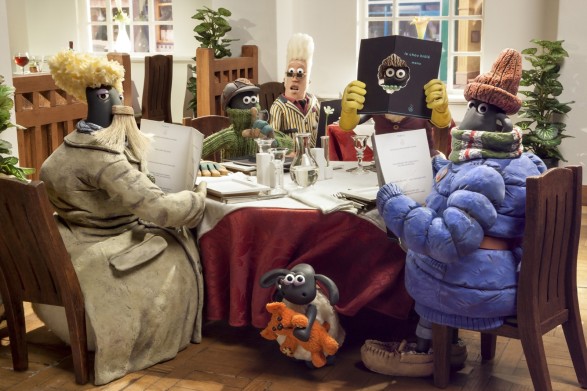 It’s the 300th review guys! And what better way to hit this milestone than with a review of a film from the creators of one of my favorite duos in moviemaking history: Wallace and Gromit. This isn’t Wallace and Gromit, though, but rather their fluffy friend they made in the short “A Close Shave,” Shaun the sheep. Yeah, I’m sure that there is no connection, unless this is a prequel (or a spinoff), but that’s what I like to connect Shawn to. Going into this movie, I had relatively high expectations. The first reason is because it’s from the makers of “Wallace and Gromit” as well as another film I loved, “Chicken Run,” Aardman Animations. They’ve made some fantastic creations overall, and I’ve been waiting for their next addition. The second, and last, reason is because of its great reviews, which shocked me. That is because of it being “Shaun the Sheep.” I watched some of the show when it was on the air at the time, and I thought it was okay. It had some funny moments, but I would have never thought that it would have become a film. Never. Now that we got it, it basically turned me away since the show itself provided no reason to make a feature length presentation. After viewing this, I can safely say that I was both right and wrong. Right in being that this does have qualities that make it feel more like a show than a film, and wrong because it was good, quality entertainment. What made this movie good? For starters, the animation. Golly day, I love stop-motion. I’ve loved it all of my life and although it can be tedious for any filmmaker to create, the product is nevertheless stunning. These people are trained in what they do, and they have basically outdone themselves from the previous picture they made, “Pirates! Band of Misfits” back in 2012 (which I also found to be a great experience). Everything about this, in terms of animation, can be picked at and studied. It’s a great aspect of watching this type of filmmaking. Outside of that, the story is where things can get messy. This is one movie where there is no talking (except for the music), but rather grunts and moans. My papa made a good point after watching it with my family and me in that it sounded like the old Lego video games. That shouldn’t be a problem though. I mean, look at the masterpiece that is “Wall•E.” But even that film had talking. This didn’t. And that’s why it feels like it’s television series: It relies heavily on physical comedy. Granted, there are some hilarious moments and I liked how they stuck to their roots, but a picture without dialogue can get strenuous when sitting through it for over an hour. It doesn’t dock off a lot of points though because it’s merely a big issue. The truest con of it all would be the fact of it barely having a plot. Yes, the sheep have to go get the farmer. But is there anything else? No. Well, other than an animal catcher trying to hunt the sheep down, but that doesn’t come until the halfway point. What I’m getting at is, with the added fact of no dialogue, this is a film that you really can’t get a lot out of. Sure, there are gags and you’ll have a fun time watching the animation, but it’s not enough to write on paper. It was rather thin in a conflict. But, don’t let this hate fool you. Yes, it’s got it’s issues, but I will say that you will be entertained. It’s fun for kids and being a teenager (soon to be young adult), I had an enjoyable experience. I loved watching these characters and throughout this movie, most of the time I had a smile on my face. It’s a likable release that has heart behind it. I wouldn’t even mind watching it again because it is fun. This is just one of those breakaway films where you can be a kid again and have a good time. It’s a fun, family release that, although it can be geared more towards kids, there are some things for adults to get a kick out of as well. I recommend families to pick this one up. FINAL SCORE: 80%= Juicy Popcorn