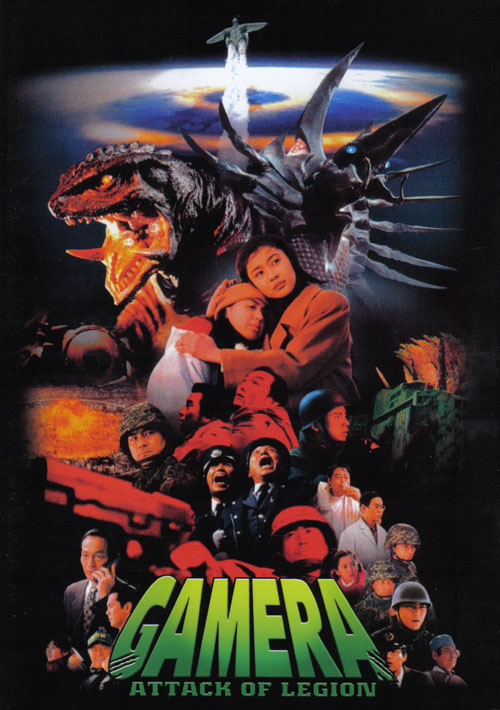 THE VINTAGE BULLET RECOMMENDATION REVIEW: The last review in this marathon (although not initially), “Gamera: Attack of the Legion” stars Miki Mizuno (Dead Mine, Kill), Tamotsu Ishibashi (Glory to the Filmmaker!, Zombie Snake), and Ayako Fujitani (Crossfire, Man from Reno). It is directed by Shûsuke Kaneko (Pride, Jellyfish) and written by Kazunori Itô (Ghost in the Shell, Avalon). Gamera is back and this time to fight the Legion, an infestation of giant bugs that feed on electricity. Because they coincidentally land in Japan, they impose a threat by taking their power. With the military failing to exterminate this infestation, the only one that can do the job is Gamera. 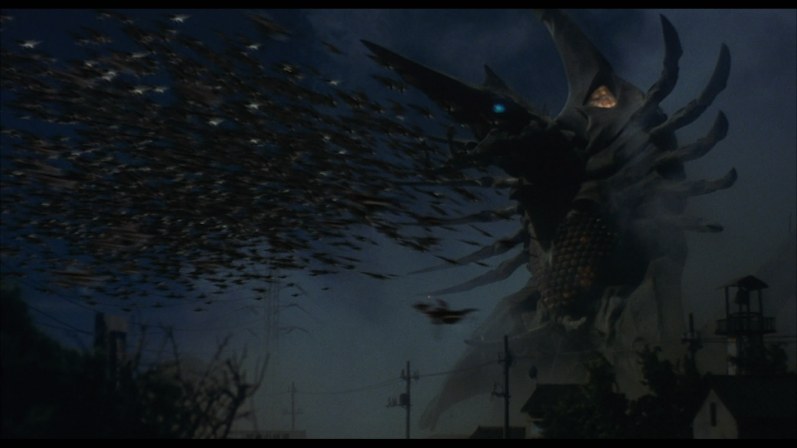 Here we are again with another “Gamera” film and yet I am still here. Why? For review’s sake only. I told my friend I would watch these movies, and it is probably one of the most difficult, non-productive thing I have ever done. Watching these movies makes me feel like I am dying on the inside. It’s like my essence is dissolving into my couch with my meat suit still stuck in front of the television. If you haven’t noticed, these movies aren’t good. Why the heck does it get a good score on both Rotten Tomatoes and IMDb? I don’t know. It baffles me. When I sat down to watch this sequel to one of the worst films I have ever seen (and the worst I’ve reviewed so far), I had the feeling that John Candy had on “The Great Outdoors,” when, after finishing a huge steak for a challenge, realizes that he has to eat the leftover fat as well. His expression is my own. So no, I didn’t want to view this and yes, I had the lowest of expectations. Those expectations probably did the best for this film for it was better than the first. Don’t expect it to be a good score, just expect it to be more than 20%. The story, like the first entry, is the same as usual. There is a monster that arrives and it is up to Gamera to take it down. Human beings are useless in the battle, but yet we see more of them than Gamera himself. In this film, the main people are the army, however, and it is boring. Their reactions are dull and they basically talk a lot of nonsense about what they should do about the villain. Then you have the original girls from the first movie come in, but they are only shown for a couple of scenes and they can basically be cut out of the film and everything will be the same, except for one scene involving the connection with Gamera. The villain itself is a rather odd one, being a bug that feeds on electricity. To be honest, it only attacked the same times Gamera did, so basically all you saw of them without Gamera was a giant flower on top of a building (their nest). All the while, besides the army banter on what to do, you have some scientists calculate how to destroy the nest and save humanity. But the thing is, a lot of it is filler. They release one nugget of information one something they can do that can stop the villain, and then they either talk more about that, or go off on an adventure which leads to more military scenes. This creates characters that are disposable and are mainly used to gain information on the villains. I don’t care about them, only the results of the matter, and even that I don’t care about (I’m basically being nice at this point). There are really two battles in this movie and they can be rather distasteful. The monsters walk incredibly slow and Gamera did more harm than good to the city. (SPOILER ALERT: he blew up an entire city in a nuclear explosion at one point. END OF SPOILER). There were some cool shots, but I was bored when they came so my mind was already wandering when it was displayed. I felt no threat throughout the whole thing and the performances didn’t help either for, other than one scream, no one acted scared at all. Granted, I said this movie was better than the first, but mainly because it is more bearable. I don’t know why, it just is. They did a little better on writing, but there are still several goofy scenes with incredibly stupid dialogue. One aspect of dialogue that was annoying was how they tried to add cussing. It felt like when kids first learn of cussing and start to curse to be cool, and it all ends up in random context. I didn’t laugh at their jokes, but I did laugh at things that shouldn’t be. An example of an incredibly awful add-on was the last song of the film. When the credits began to roll, they played this tune that had a completely different tone than the flick itself. It felt like I was watching a comedy. Another aspect of this movie I should discuss is the directing. I will admit, there were some good shots, but I also have to mention this: the freeze frames. For some reason only God knows why, they inserted some freeze frames. It interrupts the flow of the movie and it is just weird to look at. It came up during flashbacks or explanations mostly. Besides the freeze frames, the whole beginning messed up the flow as well. It felt jumbled and they cut away to different scenes too fast. One second you see army people talking, and then it does a Windows Live Movie Maker slide cut to another scene of a woman. I couldn’t catch on from the moment it began, but yet I am still here, watching these movies. Other than it being more bearable and the directing being somewhat okay, the special effects are the last pro. They are still juvenile, but once again I have to cut them some slack for it is the 90’s and their budget probably wasn’t that big. It did improve. To sum it up, this is another failed attempt at a movie genre that I dislike. Monster movie lovers will enjoy it, but I sure didn’t. Because these are such a chore for me to watch, I have decided to not view the third entry for I do not want to waste anymore of my free time for such a bland film franchise. Sorry, but I just can’t do it anymore. I should get a shirt that reads “I (almost) survived the Gamera movies.” FINAL SCORE: 43%= Burnt Popcorn/Rubbish

One response to ““Gamera 2: Attack of the Legion””