“IT’S THE BATMAN!” MOVIE REVIEW (MICHAEL KEATON EDITION): The last film in this short marathon, “Batman Returns” stars Michael Keaton (Beetlejuice, Need for Speed), Danny DeVito (One Flew Over the Cuckoo’s Nest, Matlida), Michelle Pfeiffer (Scarface, Dark Shadows [2010]), Christopher Walken (Catch Me If You Can, The Deer Hunter), Michael Gough (The Cherry Orchard, Sleepy Hollow [1999]), Michael Murphy (White House Down, X-Men: The Last Stand), Andrew Bryniarski (The Texas Chainsaw Massacre, Any Given Sunday), Pat Hingle (Undoing Time, Road to Redemption), and Vincent Schiavelli (Tomorrow Never Dies, One Flew Over the Cuckoo’s Nest). It is directed by Tim Burton (Corpse Bride, Pee-wee’s Big Adventure). Batman (Keaton) returns (get it?) in this sequel to the cult classic “Batman” (1989). Gotham City is struggling to have a peaceful era, and come around Christmas they are still not getting it when a deformed man thrown in the sewers as a baby named The Penguin (DeVito) shows up to wreak havoc. He blackmails the city’s secretly evil figurehead Max Shreck (Walken) to make him heroic in the public eye in hopes of becoming their new mayor. Bruce Wayne aka Batman isn’t fooled however and will do all he can to stop him. 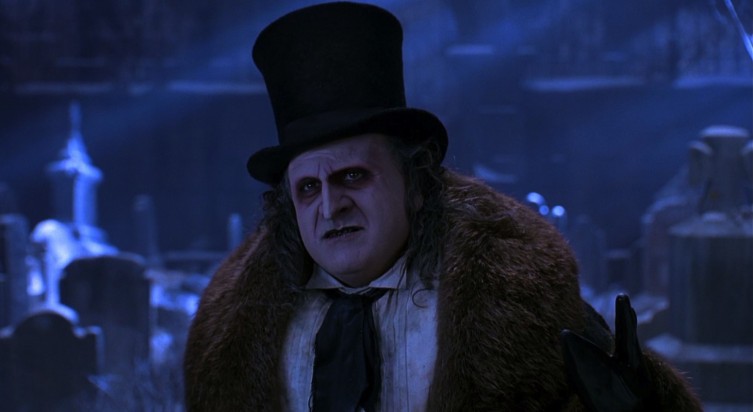 I didn’t expect much from this film, being a sequel, but I did however expect it to take what flaws the first movie had and improve. The question is, did it? Well, no. Pretty much all of the flaws I have explained in the “Batman” (1989) review are shown in this film, but it takes more of a beating. Like the previous review, I will bring up the pros of this film before I get into the cons which are found mainly in the plot. The acting, as always, is fantastic for the most part. Michael Keaton is a terrific Bruce Wayne and I will say that he has improved on being Batman. Of course there is minor goofiness at times, but not as much as this movie’s predecessor. And, it has to come up…Christopher Walken. Now, in case you haven’t noticed by the picture that is constantly on the right of this site (unless your reading off of a phone, it will be at the bottom), Christopher Walken is my favorite actor of all time and he doesn’t let me down in this, giving off a fantastic performance as usual. Every time he was on the screen it gave the movie more points. But enough about Walken, let’s talk about DeVito. He had big shoes to fill from what Jack Nicholson left and he filled them! The whole design of The Penguin was grotesque and dark, and his acting made it even creepier. With that said, I applaud him. He was a great villain and fun to watch when he got up on-screen. All the characters of this film are amazing, but I will say that I have some issues with Selina Kyle aka Catwoman (Pfeiffer). It was pretty much the same case with Batman from the first movie where I enjoyed the performance of the secret identity more than the vigilante themselves. Pfeiffer did a great job portraying Selina Kyle and I felt sympathy for her being one of those characters who get the worst of life, only to go through changes that can make them evil. But when she became Catwoman, it wasn’t the best. For starters, how she became Catwoman was complete hogwash. What happened to her is impossible to happen to someone and leaves a big plot hole. When she actually starts fighting, I don’t know, I just didn’t feel anything of the character. The love connection between her and Batman felt extremely forced until the very end, with them making bad puns while fighting each other. I just didn’t get a kick out of it (well, I did laugh at how bad the puns were). I did however feel a good love connection between Selina and Bruce. I don’t know why that is, I just feel like they develop the characters under the masks better than when they wear them. Off of the characters, let me talk about the behind the scenes factors, like the make-up and atmosphere. Gotham is dark and so is Tim Burton’s style which blend well like the first movie and it is always nice to look at all the details that go into the city. I feel that when it comes to make-up though, they out-did themselves, mainly with Penguin. Gosh, it was fantastic make-up work. It looked grimy and grossed me out a couple of times meaning they did their job well. That is the feeling you get with this whole movie. There is no sign of light anywhere in this city, even when it is daylight out. Everything is grim and that is something you can either love or hate in terms of how you want to feel. I for one like it because it is something different and that is why I watch Tim Burton movies. On another note, the musical score isn’t as good as the first movie, but it still holds up on its own. You can’t beat that main theme! But, with all of these pros (and some mentioned cons) out-of-the-way, I must bring up the plot. Now, this movie, just like its predecessor, suffers serious plot holes. I mentioned one before with the coming of Catwoman, but it can also be said with the coming of The Penguin as well. They never explain how he became who he is. There are other minor ones, but sometimes it can just get on my nerves. Another thing I found to be a problem with this movie is how silly it can be. I don’t know if they want to pertain to the old comics or the old show with Adam West, but to see a bunch of little penguins waddling around with rockets on their back doesn’t look too menacing. It made me laugh at times, but it can just be contradicting to the dark tone they try to set for this film. Overall, I feel that this film loses sight of the pizzazz that the first one had. It is a fun film, don’t get me wrong. I will most likely see it again sometime in my life because it is a good movie, but it doesn’t follow the standards of the first one that made it so good. Things like how the movie can be slow at times can keep it from ever amounting to what made you fall in love with the first one. But, there is one thing that this film did just like the first one that can ensure its survival in my books: it grows on you. I mentioned in the first review how even though the movie has its issues, it can grow on you overtime, and this film is no exception. So, what it comes down to is watch it, and you’ll like it. You probably wouldn’t love it like the first one, but this one will give you a good time. Plus it has Christopher Walken and you can’t go wrong with that! FINAL SCORE: 84%= Juicy Popcorn

One response to ““Batman Returns””