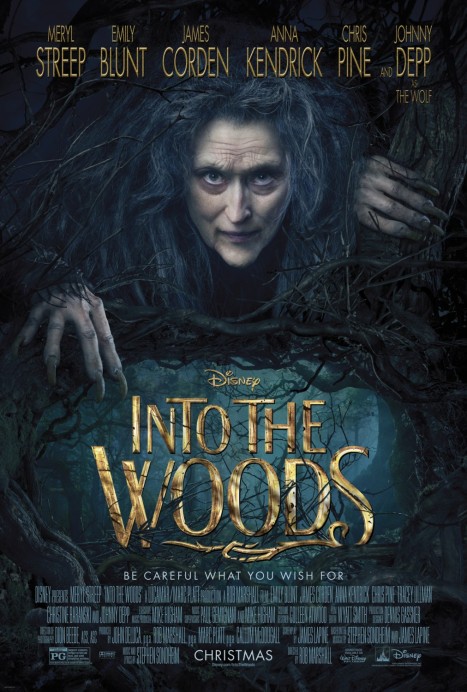 FRIDAY NIGHT MOVIE REVIEW: Good Friday has arrived and I decided to watch “Into the Woods” which stars Anna Kendrick (Pitch Perfect, 50/50), James Corden (Begin Again, One Chance), Emily Blunt (Edge of Tomorrow, The Devil Wears Prada), Meryl Streep (The Giver, Fantastic Mr. Fox), Daniel Huttlestone (Les Miserables [2012]), Lilla Crawford, Tracy Ullman (Corpse Bride, The Tracy Ullman Show), Mackenzie Mauzy (The Bold and the Beautiful, Forever [TV series]), Chris Pine (Star Trek [2009], Jack Ryan: Shadow Recruit), Billy Magnussen (The East, The Brass Teapot), Lucy Punch (Bad Teacher, Dinner for Schmucks), Christine Baranski (The Good Wife, How the Grinch Stole Christmas [2000]), Tammy Blanchard (Moneyball, The Good Shepherd), and Johnny Depp (Pirates of the Caribbean: The Curse of the Black Pearl, The Lone Ranger). It is directed by Rob Marshall (Chicago, Pirates of the Caribbean: On Stranger Tides). This film is a musical that is a coming together of all the classic tales that you know: Jack and the Beanstalk, Cinderella, Little Red Riding Hood, Rapunzel. It is in a dark, Grimm setting, and essentially centers around a baker (Corden) and his wife (Blunt) trying to get four items on a list given by a witch (Streep) so that they can uplift a curse that keeps them from having children. The items include a cow that is as white as milk, a cape as red as blood, hair as yellow as corn, and a beautiful gold slipper. Of course it would involve them having to intervene with the fairy tale characters I listed above, but it will be a challenge. 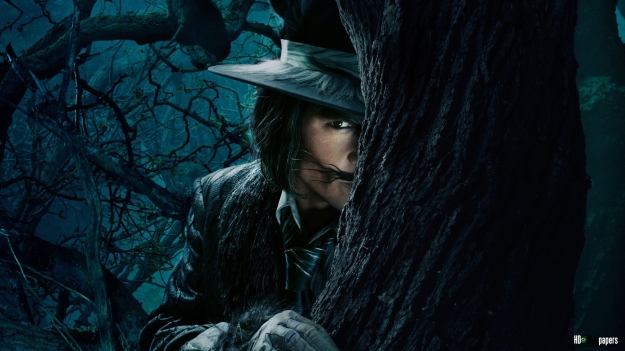 Today is Good Friday. On this day God sacrificed his only son, Jesus, on the cross for us and our sins. Seeing as how I never really acknowledged Good Friday until this year, I wanted to see a “good” movie to honor it. That is not what I got. I’m not going to beat around the bush here: this movie was downright bad. I never had high expectations for this movie, but whatever expectations I had, this movie definitely did not meet them. Before I go off saying all the bad things about this movie, let me first say what is good about it. The special effects, costumes, and tones of the setting were done well, and I enjoyed all the camera work put into this film. The acting wasn’t that bad either. There are several big names in this movie, plus some new actors that are just getting into the business and they all did a fair job at playing their roles. And I will admit, the songs get better towards the ending and actually have better meaning. Also, I will point out that Johnny Depp’s scenes (there were only two) were the best parts of the film, so kudos to him. That is all that was good so now the bad. The biggest thing on the list is the singing. The intro alone was just singing that was agonizing to my ears. It took at least thirty-five minutes for them to get to some dialogue, which is just awful. I like musicals, but when the movie is just nothing but singing, that is where I draw the line. It just gets really annoying, really fast. The next thing that is bad is the character development. This movie is dark, so of course they are going to kill off characters. The thing is, I do not care about them when they die. That’s how important this movie made their characters. I cared more about the wolf then anyone else. Some of the deaths made no sense, which I won’t spoil if you want to subject yourself to this movie. The next part about this movie I didn’t like is the story in general. It wasn’t interesting. I was exhausted after I watched it because it was bad! I checked the time almost every five minutes. I stuck through it though because I am supposed to in order to review this fully! Speaking of sticking through it, the last reason why this movie is bad is the ending, which was horrible. It was sad and scrapped what this movie was setting up the whole time. Overall, this movie is a mess which no one should watch unless they are crazy. FINAL SCORE: 29%= Burnt Popcorn