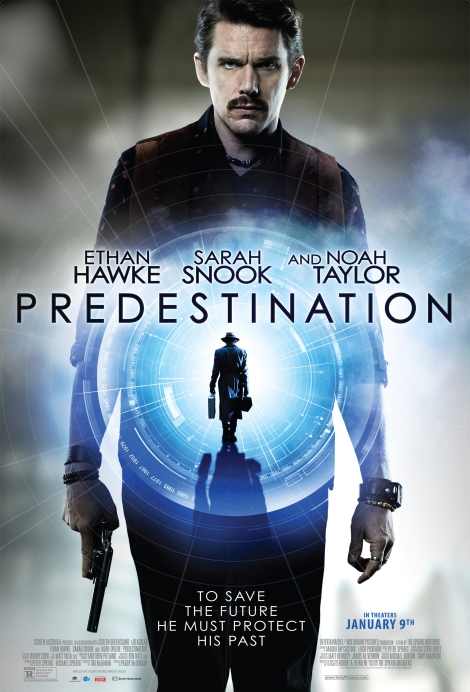 FRIDAY NIGHT MOVIE REVIEW: Tonight, I saw the movie “Predestination” which stars Ethan Hawke (Boyhood, Gattaca), Sarah Snook (Jessabelle, Not Suitable for Children), and Noah Taylor (Charlie and the Chocolate Factory [2005], Vanilla Sky). This movie is about a Temporal agent (Hawke) that works for a bureau that stops bad events that involve several innocent deaths from happening. He has fulfilled many cases, but one person, known as the Fizzle Bomber, has always eluded the agent. When he goes to stop the Fizzle Bomber from blowing up another area, he succeeds, but with a consequence. When concealing the bomb, he doesn’t close all of it up in time and some of the blast burns his face, causing him to have facial surgery which changes his life. He wants revenge, but before he can, he has to do one final mission: to arrange several events in the past to make sure that he becomes the agent that he is today. 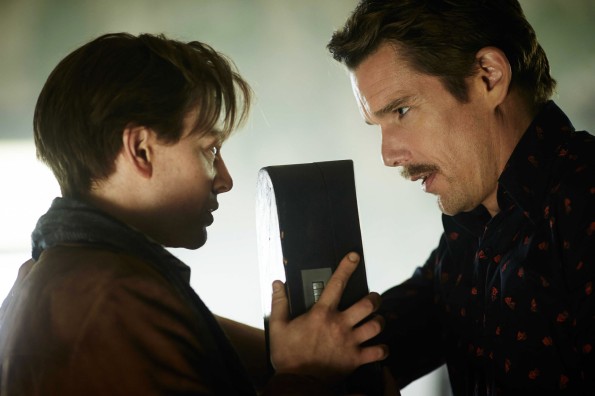 This movie is nothing like I have ever seen before. I thought that I was in for a simple time-travel movie, but I got something totally different. It would take a long time to explain what this movie is going for and if I try, it can spoil the whole movie. So I am just going to go about breaking down what is good about this film. First up is the story. It definitely is something original off of an idea (time-travel) that is used a lot. I give major props to that because of how it offers a fresh take. My mind was exploding when it got towards the middle and didn’t stop until it ended and that’s only because there wasn’t any film left to mess up my head. What this film does is it gives the viewer a way to see a bunch of events tie together and it gets pretty crazy. It grossed me out once it came together and that can be put down as a con because of how sick and twisted it gets. The acting is amazing with Ethan Hawke pulling off a great performance and Sarah Snook, whom I’ve never heard of, did a fantastic job seeing as how she had the spotlight for a lot of the movie. She gave depth and realism to her character and I respect that. Other than the fact that this movie got dark and disgusting at a certain point in the film, there really isn’t any other con that I can think of. I enjoy movies that have me think a lot and this one is definitely one of those! I recommend anyone that hasn’t seen this film to watch it! FINAL SCORE: 92%= Juicy Popcorn