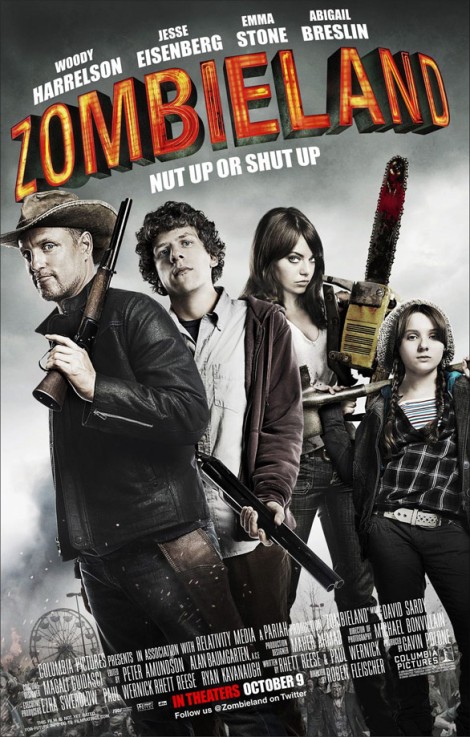 FRIDAY NIGHT MOVIE REVIEW: Again, this one is for the last Friday (February 21 to be exact). I haven’t had much free time lately, but now I am able to post another review so here it is!! The movie I saw was “Zombieland” which stars Jesse Eisenberg (The Social Network, Now You See Me), Woody Harrelson (No Country for Old Men, Cheers), Emma Stone (The Help, The Amazing Spider-Man), Abigail Breslin (Little Miss Sunshine, Signs), and Bill Murray (Groundhog Day, Ghostbusters). A good amount of people should of heard of this movie already, and most have seen it, but this was my first time watching the movie and it was actually pretty good. Basically it is about a college student named Columbus (Eisenberg) who is just trying to make his way in a zombie-infested America. He has several rules that he develops to keep him alive which are pretty funny to watch. After a while of being on his own, he meets a short-tempered crazy guy who has a craving for Twinkies named Tallahassee (Harrelson) and they become great friends. They then travel around together, trying to look for any surviving Twinkies in the process, until they run into these two trickster sisters named Wichita (Stone) and Little Rock (Breslin), who constantly swindle them into taking their vehicles or supplies to survive. But eventually they end up stuck with each other on a long road trip to an amusement park seeking shelter. I thought that this movie was really good. I mean, I like almost any movies with zombies in it because it is a very interesting and awesome villain to have in a movie. The best parts in the movie had to be when Bill Murray came in out of no where and made references to a couple of his movies (Little Rock- “So do you have any regrets?” Bill- “Garfield”).  The gore factor in the movie was a bit much, since I had trouble eating my popcorn throughout the film, but what would you expect from a zombie movie? Also there was a lot of bad language in the movie, but then again it is rated R! Overall, the movie was a cool experience that I recommend anyone to watch if they haven’t (except kids). FINAL SCORE: 83%= Juicy Popcorn